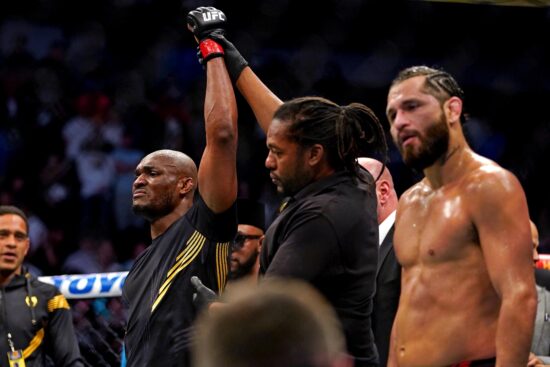 UFC 261 welcomed fans back for the very first time since the COVID-19 outbreak.

15,000 live spectators packed their way into Jacksonville’s VyStar Arena for what would be a dramatic night of all-out action.

Tense rivals following the lead up to their UFC 251 clash last year, Masvidal and Usman have rarely seen eye-to-eye.

With last year’s title fight ending in a unanimous win for Usman, although taking the champ the distance, the final result was never in doubt.

Playing on the fact he took last year’s bout on short notice, Masvidal was eventually granted the opportunity of a rematch at last weekend’s UFC 261 – and it did not disappoint.

Stunning Knockout Confirms Usman is The King at 170lb

Last weekend’s main event saw a thoroughly exciting line-up. Top to bottom there were exciting match-ups – undoubtedly though, all attention was firmly placed on Masvidal and Usman’s built-up rematch.

As both men stood toe-to-toe, fans in attendance, as well as the ones at home, could cut the atmosphere with a knife.

The fight between Masvidal and Usman started with back-and-forth exchanges and by all accounts, on the face of it, had all the makings of being a much closer fight than the first.

However, as the second round got underway, following a brief taunt from Masvidal, Usman unleashed a simply superb right-handed cross strike.

The vicious strike saw Masvidal out cold while still upright – sweat, upon impact, sprayed across the canvas.

The knockout, which will undoubtedly be shown for many years to come, is up there with the most clinical strikes to ever be thrown, in the history of top-level mixed martial arts.

Reacting for the first time since Saturday night, ‘Gamebred’ has broken his silence on how his counterpart got the better of him.

I look at it and I’m like ‘Wow, perfect timing!’ – That misleading – I thought he was going in for a shot and when I realized it wasn’t a shot, it was too late. I was throwing my check left hook, but it was already too late. I read the information wrong, so he sold it to me beautifully, and that’s why he got those results.”

Jorge Masvidal on how Kamaru Usman knocked him out

Not only was Usman’s strike devastating in terms of power, the precision required to land it as cleanly as he did cannot be underestimated.

Weighing in on just how good a shot it was, Masvidal has been quick to congratulate his recent opponent and has insisted he’ll be back to action in no time.

In that moment right there, I am a fan because I love the sport so much, and it was just beautiful technique.

There were definitely some bad moments and some good moments that out of that fight – I’m just ready for what’s next, you know? – I’m 36-years-old, I still feel good. I still can push myself in the gym and not be overwhelmed, even by the young guys, so why not give it another run, you know?

Jorge Masvidal on his MMA future