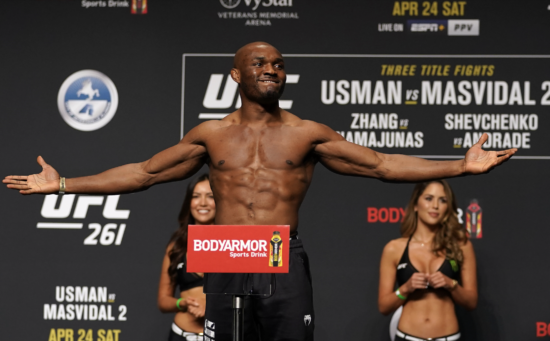 UFC welterweight champion Kamaru Usman has revealed that he is open to the idea of moving up a weight class but would only do so if close friend Israel Adesanya were to lose his middleweight title.

The Nigerian-born all-rounder has enjoyed a monumental rise to the top of the UFC’s rankings.

Following a stunning 17 fight win streak, including a 14 fight unbeaten run in the UFC, Usman now sits proudly on top of the promotion’s pound-for-pound rankings.

The welterweight’s surge has recently been amplified by two stunning victories over arch-rival Jorge Masvidal.

Following the pair’s gruelling encounter during the summer of 2020, Usman, who came away with a decision win that night, agreed to fight ‘Gamebred’ once more at UFC 261.

In what was one of the cleanest and most devastating knockouts in the sport’s history, a stunning right cross from the champion sent his Miami-born rival into what can only be described as the fight game’s shadow realm.

Despite already cementing his place in the sport’s most illustrious conversations, Usman has revealed he has plans to write history and could attempt to become a two-division champion.

Will Make the Move to 185lb on One Condition

Seemingly keen to replicate the achievements of Conor McGregor, Daniel Cormier, Amanda Nunes, and Henry Cejudo, Usman has admitted he is open to competing for two belts.

With Adesanya set to defend his strap against rising contender Marvin Vettori at UFC 263 and Usman eyeing a quick fight turnaround, there is mounting speculation that the welterweight king’s next bout could be for his second title.

However, despite having one eye on the middleweight division, the ‘Nigerian Nightmare’ has revealed to ESPN’s Brett Okamoto that he would only make the jump if his good friend and current champ Adesanya is not “in the picture”.

But if there was a case to where I would actually go up and challenge for that belt it would be without Izzy being in the picture.

So if Izzy is not champ, then it’s something I could take a look at.

Kamaru Usman on the possibility of moving up to middleweight