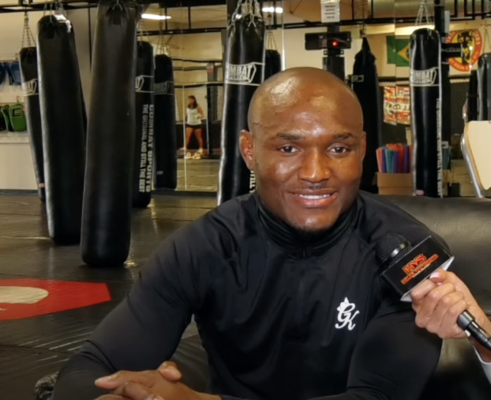 Ahead of their mouth-watering rematch, scheduled to take place on November 6, at UFC 268, welterweight champion and pound-for-pound king Kamaru Usman has been speaking about his long-time rival Colby Covington.

The pair first met at UFC 245 nearly two years ago.

Despite successfully defending his title by way of a very late knockout, Usman was pushed for over 20-minutes by Covington.

Having then gone on to defend the 170 lb strap another three times, including a duo of victories over Jorge Masvidal, Usman is now set to rematch Covington – a well-rounded fighter who is widely regarded as the biggest threat to the Nigerian’s throne.

Despite the pair frequently engaging in back and forth trash-talking, after speaking recently to Helen Yee, Usman has surprised fans by dishing some classy praise in Covington’s direction.

He’s definitely up there. I’m no hater, I give props where props are due.

I think Colby probably is, I would put him in the top-15 welterweights of all time, as far as fighter-wise and skill-wise, the way that he fights.

You may not like him personally, which I really don’t, but as far as skill-wise, he’s a good fighter.

Usman vs. Covington 2: What the Oddsmakers are Saying

In light of their first fight, it is perhaps unsurprising to see the reigning champion open as the online oddsmakers’ overwhelming favorite.

Despite the pair going just over four rounds during UFC 245’s main event, Usman was the bout’s deserved winner, which was rightfully reflected by the majority of the fight’s judges scoring it 39-37 prior to the fight being waved off.

Ahead of the fierce rematch, fight fans can currently find Usman sitting pretty at a price of -280, while underdog and title outsider Covington hovers around the +240 mark.