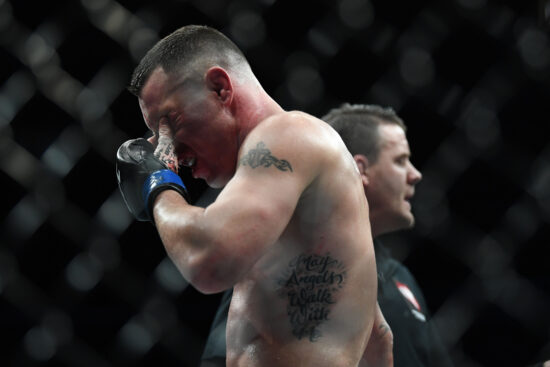 Ahead of a potential title rematch, Ali Abdelaziz, the manager of welterweight champion Kamaru Usman, has hit out at contender Colby Covington.

Having fought 13 times in mixed martial arts’ big league, the American wrestler has gone on to claim 11 victories while suffering just two losses, including one against Usman.

Adored, but also loathed, Covington’s outlandish trash-talking style frequently sees him hitting fighting headlines as he certainly lives up to his nickname ‘Chaos’.

Having climbed his way to the top of the welterweight division, UFC 245 in 2019 saw ‘Chaos’ secure a long-awaited title fight against dominant champion Usman.

In what was an excellent fight that many regards as Usman’s toughest challenge yet, Covington dragged the champ all the way to the fight’s fifth round.

Although the result was never really in doubt as Usman saw his hand raised by way of a late TKO, Covington is now the favorite to be next in line for another title shot.

Speaking to MMA Junkie about the possibility of his star client facing one of MMA’s most controversial fighters, Usman’s manager Abdelaziz, has spoken of his disdain for Covington.

Listen, last time they fought, he broke his jaw. This fight, I hope he becomes blind or something bad happens to him because he’s a very bad guy. He’s on the same piece of sh*t level as Conor [McGregor]. They’re head to head. He’s a racist scumbag. I think he plays the race card, but I think he really is.

He insults people’s religion, wife. You see him talking about Dustin – he said Dustin Poirier’s wife is a prop. How are you gonna say that? This is a guy he used to train with, sweat with, eat with. How are you gonna talk about him like that?

We know what happened last time when we met him at the Palm, and he called the police on Werdum and myself. I think Dana White is right: This is the fight.

He’s the promoter and at the end of the day, you want Colby Covington drinking out of a straw or not walking for a year or two years because he’s a decent fighter. He’s not a great fighter.

He’s gonna be there hanging out, but I believe Usman will hurt him really, really badly.