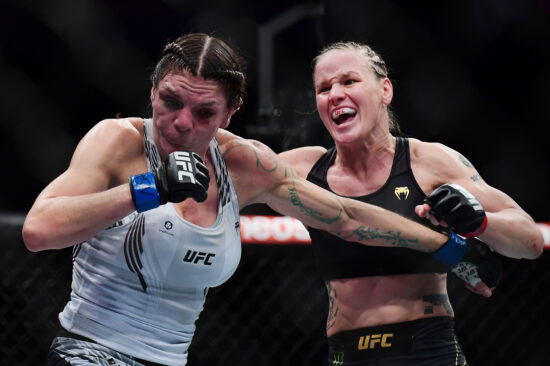 The Kyrgyzstani fighter was once again at her scintillating best as she continues to remind the mixed martial arts world why she is to be considered one of the most complete fighters on planet earth.

Shevchenko’s performance last Saturday saw her toy with her prey for close to 20-minutes before earning a TKO victory during the fourth round.

Murphy, like many others before her, will undoubtedly be feeling deflated following her recent loss, however, despite ending up well beaten, the American did her cause no harm and was even classier in defeat.

Taking to her official Instagram, the recent title challenger offered up her thoughts and took the time to praise the great Shevchenko.

Rough night at the office I couldn’t do s**t in there last night. Sometimes it just be like that.

It was an honor to share the cage with a fighter of Valentina’s caliber. I am proud to have earned a spot across from her.

I loved the walkout and felt great in the cage. My corners did a great job too. They just kept it simple and positive, like I asked them to. I can’t stand it when corners rush in and scream at a fighter about how they’re losing rounds…

I know when I’m losing rounds and I knew I needed to make something happen. I couldn’t make it happen due to getting hit every time I tried.

As the great Chael P Sonnen once said, “The problem is, I was in there with a much better fighter tonight”.

S**t happens, but I’m okay. We live to fight another day.

Thank you @ufc @mickmaynard @danawhite for the opportunity, and thank you @bulletvalentina for the fight. It was an amazing experience to fight for the UFC title, I’ll never forget it or regret it.

I’ll be back but for now I want to enjoy some time off.

Thanks everyone for your support and kind words! They’re appreciated.

In light of her most recent performance, which now sees her extend her reign at 125lb to nearly three years, fight fans have been left wondering who is next for Shevchenko.

UFC president Dana White recently admitted that should feather and bantamweight champion Amanda Nunes beat Julianna Pena in her next fight, then he will consider setting up a trilogy bout between the two best female mixed martial artists to ever grace the octagon.