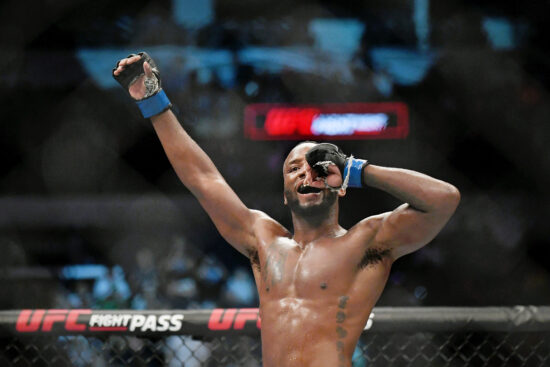 This weekend’s latest PPV will see Diaz return from a near two-year layoff to square off against Edwards in the promotion’s first-ever standard bout to have five rounds.

Currently preparing to face one-half of the notoriously tough Diaz brothers, Edwards already has his sights set on the division’s belt.

The welterweight division has been governed by 170lb star and pound-for-pound great Kamaru Usman since the Nigerian won the title off Tyron Woodley in 2019.

Since then Usman has gone on to reign supreme over all those put in his way.

Four successful title defenses against the likes of Colby Covington, Gilbert Burns, and a double victory over Jorge Masvidal have cemented Usman’s place among the sport’s greatest ever champions.

However, despite suffering a historic loss against the champ, Edwards, who has undoubtedly improved as a fighter since their first fight back in 2015, is likely to be the ‘Nigerian Nightmare’s’ next contender.

Currently, on a stunning nine-fight unbeaten run, Edwards, now ranked as the division’s top three contender, appears to be just one win away from a shot at gold.

The Road to Glory is ‘Rocky’

Since making his promotional debut all the way back in 2014, English all-rounder Edwards, nicknamed ‘Rocky’, has enjoyed a monumental rise.

Despite being well on his way to the top of the welterweight pile, Edwards has been unfortunate not to have competed more frequently over the last couple of years.

A series of unfortunate injuries and a positive COVID-19 diagnosis had forced the 29-year-old to be sidelined and out of action for nearly two years.

However, after making his long-awaited comeback against fellow contender Belal Muhammad in March this year, although the bout, unfortunately, ended in a no-contest due to an accidental eye-poke, ‘Rocky’ is now set for a quick turnaround.

Ahead of this weekend’s stacked and hugely exciting UFC 263, Edwards, who spoke to BT Sports’ Adam Catterall, has predicted how he envisions Usman’s welterweight reign to come to an end.

Yeah, for sure, his [Usman] strikings getting better, you know. I think he’s probably fallen in love with his hands now, you know.

Like I said, to go out there and put Masvidal away, Colby away, and Burns away — he’s probably fallen in love with his hands. But I think that’s gonna be his downfall.

He’s gonna fall so in love with his striking, but I that’s gonna be his downfall, in the end, you know.