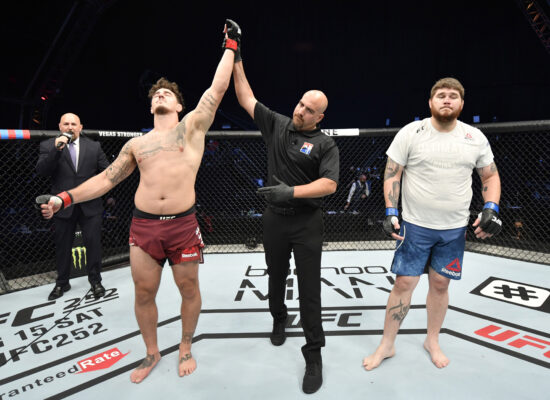 Former UFC middleweight champion Michael Bisping has taken the time to talk up rising British star Tom Aspinall, declaring the 28-year-old has the potential to become the heir to the heavyweight throne.

Aspinall made his UFC debut less than a year ago but has already racked up three wins on the bounce, including an impressive submission victory over former champ Andrei Arlovski.

The well-rounded Brit, who displays both an effective ground and stand-up game, is sitting pretty with a professional record of 10 wins and just two losses.

Two of the most notable aspects of Aspinall’s fighting style comes from the fact he has the footwork and hand speed of a much lighter fighter – combined with his 245lb and 6’5″ frame, the heavy-hitting Brit makes for a devastating competitor.

Although it is not yet known when Aspinall will be back in action, his second-round dismantling over Arlovski earlier this year saw the heavyweight contender come away unscathed, suggesting a quick turnaround could be on the cards.

Although Aspinall has family connections to Poland, which he proudly displays during his walk-outs by way of a duel flag, the 28-year-old was born and bred on English soil – and England could very well be the location for the rising star’s next bout.

Given the complications the ongoing COVID-19 pandemic is having, it is impossible to predict what the remainder of the year may have in store.

It has only been recently that PPV UFC cards have been able to be staged in front of full capacity crowds, and so far, these crowds have not been seen outside of the US.

However, a recent report from leading MMA journalist Ariel Helwani claimed the fighting promotion had held initial discussions over a possible return to Britain.

If anybody knows what it takes to take the US by storm it’s inaugural English UFC champion, Michael ‘The Count’ Bisping.

Although now retired, Bisping’s name will forever go down in fighting folklore, especially among fan fights across the pond.

Following his 2016 win over Luke Rockhold, Bisping became England’s first-ever UFC champion and now he suspects it won’t be long until the country sees their second.

Speaking exclusively to TalkSPORT, Bisping, who now plies his trade as a commentator and fight analyst, believes Aspinall has all the required ingredients to replicate his prior achievements.

He’s such a big guy, but he moves like a middleweight. He’s fast on his feet and very agile. He has the speed, which is important. Speed kills power and on top of that he has the power.

He’s a big dude, he can wrestle, has heavy hands, is agile. He’s potentially a champion.

In the heavyweight division, you’ve got some monsters right now like Francis Ngannou.

I wouldn’t be throwing him in against Francis anytime soon, but Tom’s last fight against Andrei Arlovski, a former champion, he defeated him pretty well.

Tom has got a very bright future and I’m excited to watch him grow.