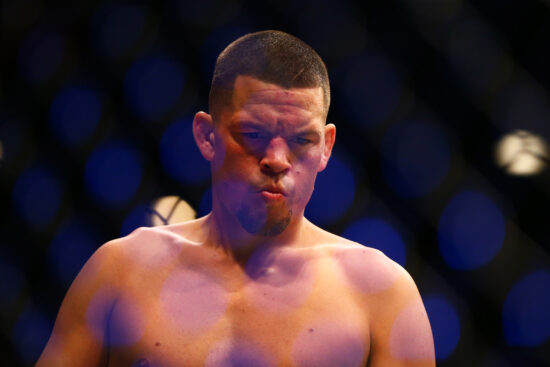 UFC 262 is quickly becoming one of the most exciting fight cards in MMA history.

The jam-packed event, which is set to take place in Houston, Texas in May, will see Michael Chandler and Charles Oliviera compete for the vacant lightweight title.

Although the fight card is still some way from being filled, other notable bouts already include top contenders Tony Ferguson vs. Beneil Dariush and featherweights Shane Burgos vs. Edson Barboza.

However, one of the most exciting elements to UFC 262 will be the return of fan-favorite Nate Diaz.

News recently reached fans that Stockton’s own former title challenger will be making a return to take on England’s Leon ‘Rocky’ Edwards.

Following his near two-year-long layoff, Edwards found himself back in action earlier this year against fellow contender Belal Muhammad.

Despite both welterweights sitting comfortably inside the division’s top 15 rankings – fans were left bitterly disappointed.

An accidental eye-poke on Muhammad in the fight’s second-round halted proceedings and although a rematch was originally speculated, the UFC clearly has other plans for Edwards.

Reacting to the news his rival is set to face-off against Diaz later this year, Muhammad has reassured fans he’s over his recent eye injury and remains fully committed to his next fight… Whoever that may be against.

Although never a UFC champion, Diaz is arguably one of the promotion’s most globally recognized fighters.

After shooting to stardom off the back of a two-fight showdown with Irish superstar Conor McGregor back in 2016, Diaz has gone on to increase the sport’s popularity.

Following the news he is set to make another long-awaited return, May’s UFC 262 bout against rising star Edwards will signal the end of Diaz’s 18-month layoff.

History in The Making

It has been confirmed that Edwards and Diaz’s UFC 262 co-headlining bout will be the first of its type to have five rounds.

Until now, all UFC main events and title fights are scheduled for five rounds, with non-title co-main events always having three-rounds.

However, with that now set to change in May, both welterweights will need to train for a potential 25-minutes of action, opposed to the standard 15-minutes.