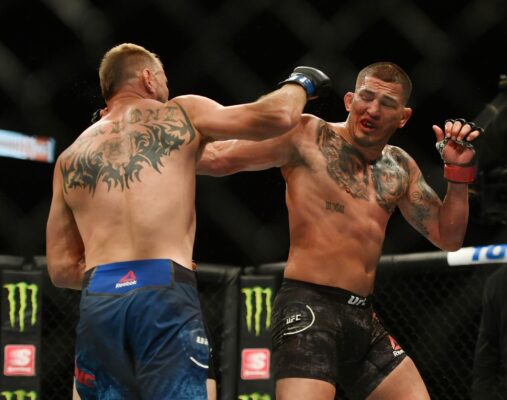 The UFC on ESPN 24 suffered several setbacks, and the organization is trying to control the damage with changes in the main card.

Cowboy and Morono to Feature in a Co-Main Event

After numerous cancelations, the UFC booked a welterweight match between Donald Cerrone and Alex Morono, which will serve as a co-main event at the upcoming UFC on ESPN 24 set for this Saturday night in Las Vegas. Both fighters accepted this offer on short notice, and it will be interesting to see their current condition.

Cerrone is on a cold streak, not winning in five consecutive matches, suffering four defeats, and participating in one no-contest contest. He lost to Tony Ferguson, Justin Gaethje, Conor McGregor, and Anthony Pettis, while the latest bout vs. Niko Price finished as a majority draw. However, following additional tests, it was found out that Price used marijuana, and the organization overturned the result to no contest.

Meanwhile, Alex Morono had mixed success in recent matches, winning and dropping two. After beating Max Griffin, he lost to Khaos Williams via KO in the first round. After that, he defeated Rhys McKee and suffered a loss via a unanimous decision to Anthony Pettis.

Waterson vs. Rodriguez to Headline the Event

The organization had no other option but to react like this because of several setbacks and cancellations. The originally planned main event between Cory Sandhagen and TJ Dillashaw had to be removed due to Dillashaw’s cut on the head earned during one training.

Also, the ladies’ bantamweight match between Holly Holm and Julianna Pena was removed due to Holm’s health problems.

At one point, many believed that the welterweight match between Neil Magny and Geof Neal might serve as the headliner, but the latest intel is suggesting that the flyweight bout between Michelle Waterson and Marina Rodriguez might be the main event. This speculation is still not officially confirmed by the UFC.

Nate Diaz was supposed to meet with Leon Edwards at the UFC 262, but it seems that won’t happen. Even though it is still not confirmed, Diaz suffered a minor injury, and he won’t be 100% ready for May 15.

The UFC will move the bout for UFC 263 set for June 12 in Glendale, Arizona, not changing anything regarding the same – welterweight, five rounds.

This is one of the most expected contests since the campaign started. The hype surrounding Diaz is enormous as always, and each of his fights creates colossal attention, while on the other side, Edwards wants a big name in his resume, which would later give him a chance to fight for the title.

Apart from this match, everything else at the UFC 262 remains the same. The headliner of this spectacle will be the lightweight title-bout between Michael Chandler and Charles Oliveira.