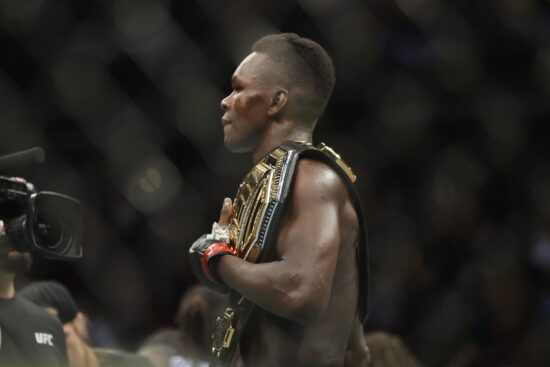 T-Mobile Arena in Paradise, Nevada will host the next UFC event dubbed UFC 276: Adesanya vs. Cannonier. The headliner bout is the UFC Middleweight Championship between reigning champ Israel Adesanya and challenger Jared Cannonier.

That’s not the only title fight we’re going to see this Saturday. The same day, featherweight champion Alexander Volkanovski is going toe-to-toe with Max Holloway.

In addition to the two title bouts, there are another two fights on the main card, as well as four preliminaries and as many early prelims.

UFC 276: Adesanya vs. Cannonier: How to Watch and Start Times

Israel Adesanya is widely regarded as one of the best MMA fighters on the planet, with a 22-1 record in his professional career. His only loss happened in March last year when he fought against Jan Blachowicz for the UFC Light Heavyweight title in what was Adesanya’s divisional debut.

Since then, he’s returned to the middleweight division where he’s been the champion since 2019. He won the title by defeating Kelvin Gastelum and has defended the title five times since then. His next title defense comes this Saturday when he’s locking horns with Jared Cannonier.

Even though Cannonier is no.2 in the UFC middleweight rankings, his record is nowhere near as impressive as Adesanya’s. Tha Killa Gorilla is 15-5 in his professional career.

The two heavyweight legends meet for the third time in history. Their first duel happened in December 2019 when Volkanovski won by decision, thus taking away the featherweight championship belt from Holloway.

Holloway tried to get it back seven months later but failed to do so – Volkanovski beat him again by decision. Since that fight, Volkanovski defended the title two more times, against Brian Ortega and Chan Sung Jung.

The fight against The Korean Zombie was his most recent fight, which saw the reigning champion win by technical knockout, winning his first Performance of the Night bonus.

However, Pereira’s record is nothing short of impressive. He is 5-1 so far, with his only defeat happening back in 2015 in his MMA debut. If you’re wondering why he hasn’t fought more MMA bouts, it’s because Pereira’s been competing in kickboxing as well, where he’s 33-7.

Even though Pedro Munhoz has a pretty decent record with 19 wins and seven losses, he hasn’t been great in recent times. In fact, this guy lost four of his previous five fights. On the bright side, all of those losses happened by decision, with Munhoz getting the Fight of the Night bonus for three of those fights.

Unfortunately for him, it doesn’t seem very likely he’s going to improve his run this weekend. The thing is that he’s taking on Sean O’Malley, a fighter who’s 15-1 in his professional career. Plus, this guy’s been great lately, winning the Performance of the Night bonus in four of his previous six fights.