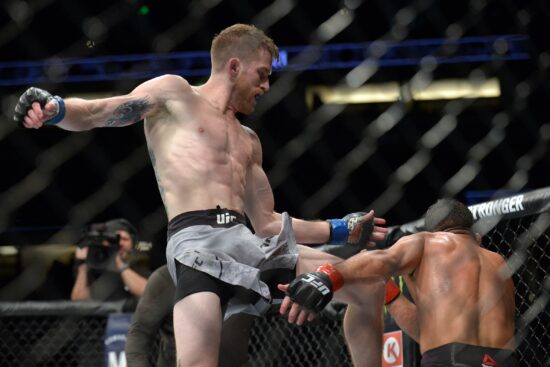 If you’re in search of some UFC predictions for this weekend’s exciting Fight Night, look no further – Vegas Odds has you covered!

The UFC bosses went with the Cory Sandhagen vs Song Yadong bantamweight fight for the event headliner. The reason is that both fighters are famous for putting on a show in the octagon, as evident from the fact that each of them won a ‘Performance of the Night‘ bonus within the last 12 months. In fact, Sandhagen won the bonus in three of his previous four UFC outings. Meanwhile, Song has won this bonus four times in his 10 UFC bouts.

Cory Sandhagen vs Song Yadong is the most exciting matchup of UFC Fight Night 210, but this doesn’t mean other main card fights don’t deserve your attention. On the contrary, all of those bouts seem great for betting, so if that’s what’s on your mind, you better check out our top UFC predictions below.

UFC Fight Night 210: How to Watch and Start Times

Our Cory Sandhagen vs Yadong Song prediction is that this is going to be a very entertaining fight. In fact, we think it might be crowned the Fight of the Night by the UFC. Both fighters are fun to watch and they both have a lot to fight for.

Sandhagen is desperate to get a win after losing two of his previous UFC bouts. One of those was the fight for the interim UFC Bantamweight Championship, which he lost to Petr Yan by decision in October 2021. It was the second straight time that he fought a five-rounder. Three months earlier, he lost to T.J. Dillashaw by split decision after 25 minutes of fighting.

His opponent, Yadong Song, has never fought a 25-minute bout, but the Chinese fighter is famous for his great stamina. Same as Sandhagen, he too tends to strike his opponents a lot and is strong enough to withstand heavy punches.

Top MMA betting sites see Gregory Rodrigues as a -120 favorite in the co-main event of UFC Fight Night 210, but the Vegas odds aren’t miles apart. His opponent, Chidi Njokuani is priced at -106 at the moment of writing.

We think the oddsmakers are right to go with such odds as anything can happen in a fight like this. Both fighters have only recently started their UFC odyssey, even though they’re already in their thirties.

Chidi Njokuani is 33 years old, and he’s fought two UFC fights so far. We saw him winning both times by KO/TKO and collecting the Performance of the Night bonus each time. Before that, he had spent nearly four years fighting under the banner of Bellator MMA.

Gregory Rodrigues has fought four UFC fights in his career, winning three of those. Two of his UFC wins happened by KO. His only UFC loss thus far happened by split decision. He lost to Armen Petrosyan, an Armenian kickboxing wizard who previously had a 5-1 record with all wins by KO/TKO.

That said, Gregory Rodrigues has proven himself against hard-hitting opponents. We think he’s not going to get KO-ed on Saturday. Instead, he might do that to Njokuani.

Andre Fili is a member of Team Alpha Male, with his teammates including T.J. Dillashaw, Cody Garbrandt, and other successful fighters. Fili, however, still hasn’t achieved much in the UFC, even though he’s been fighting in the world’s best MMA promotion for almost nine years.

He is 21-9-1 overall, with a UFC record of 9-8-1. He’s without a triumph in the octagon in his previous three outings, with his most recent win happening in June 2020 when he beat Charles Jourdain by split decision.

On September 17, his opponent is Bill Algeo, whose record is 16-6, with three wins and two losses since coming to the UFC. His most recent trip to the octagon saw him bully Herbert Burns for seven minutes before getting a TKO win.

Bill Algeo was superb against Gilbert Burns’ brother in July, and we expect him to put on the same level of performance at UFC Fight Night 210.

After going 8-0 (all knockout wins) in promotions like Magnum Fighting Championship, Slam FC, and Bellator, Alen Amedovski got himself a UFC contact. Were the UFC bosses right to offer him a deal? Judging by what we’ve seen from him so far, the answer is no.

The Macedonian lost his first three UFC fights and is expected to lose again. Joe Pyfer is the man whom bookies see as a -430 favorite. He’s a 25-year-old American who got a UFC contract after a TKO win in Week 1 of Dana White Contender Series 2022 (he was the only one to get the contract that evening).

It was his second DWCS fight – the first one ended badly, with Pyfer dislocating his elbow. The injury looked really ugly, but Bodybagz didn’t even make a sound, showing the world how tough he actually is.

Tanner Boser is 20-8 in his professional career, with a 4-3 record in the UFC. His record in the world’s elite MMA promotion might not seem too impressive, but there’s an explanation for that – the Canadian fighter has faced some amazing opponents so far.

Boser’s three UFC losses happened to Cyril Gane, Andrei Arlovski, and Ilir Latifi, each time by decision. Gane is three inches taller than him and as much as seven pounds heavier. It’s a similar story when it comes to Arlovski. When it comes to Latifi, he might be shorter than Boser, but the Swede was able to use his grappling skills to get to a split decision win.

This Saturday, Boser is locking horns with a fighter who’s not much different than him in terms of height and weight. Rodrigo Nascimento Ferreira, however, differs from Boser in that his favorite way of finishing opponents is submission. Six of his eight pro wins happened by this method.