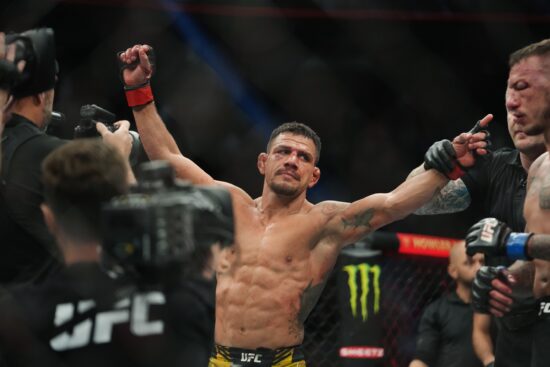 UFC on ESPN: dos Anjos vs. Fiziev a.k.a. UFC on ESPN 39 or UFC Vegas 58 is on the program next weekend. UFC Apex in Enterprise, Nevada is the place where this event will take place on Saturday, July 9. As you’ve probably figured out from the event’s name, the headliner bout is Rafael dos Anjos vs. Rafael Fiziev.

Rafael dos Anjos, who’s a former UFC Lightweight champ is locking horns with rising star Rafael Fiziev who won the Performance of the Night bonus two times in his previous four fights. Knowing this, it’s clear the main event will bring us plenty of excitement.

But that’s not the only interesting fight on the schedule this coming Saturday. In fact, all of the remaining five main card fights look really interesting, which is why we decided to analyze each of them. Apart from previewing main card fights, we’re also going to share our top UFC picks with you.

UFC on ESPN: dos Anjos vs. Fiziev: How to Watch and Start Times

Rafael dos Anjos is 31-13 in his professional MMA career which started back in 2004. Now a 37-year-old, dos Anjos used to hold the UFC Lightweight Championship belt a few years ago. He won the title in 2015 after beating Anthony Pettis and was able to defend it once (against Donald Cerrone).

Dos Anjos lost the title in the summer of 2016, after which he hit a sort of rough patch, losing five of the following ten fights. What’s interesting is that most of those fights were welterweight fights. However, in 2020, he made his comeback to the UFC Lightweight division. Since returning to his favorite weight class, he is 2-0, with his most recent win being a decision win over Renato Moicano in March.

The former champ might be in decent form, but so is his opponent. Actually, Rafael Fiziev has been nothing short of impressive after coming to the UFC. He did lose on his promotional debut – which was his first (and only) loss – but then entered a 5-win streak.

For two of those wins, Fiziev earned the Performance of the Night bonus. Further, another two fights were voted the Fight of the Night.

After doing great in Dana White’s Contender Series 2021, Caio Borralho got himself a UFC deal. The Brazilian fighter made his promotional debut in April at UFC on ESPN 34, where we saw him beat Gadzhi Omargadziev by unanimous decision.

His next fight is against Armen Petrosyan, whose career took a similar path. He did well in Dana White’s Contender Series last year, which got him a chance to compete in the UFC. His debut happened in February at UFC Fight Night 202, where he defeated Gregory Rodrigues by split decision.

Knowing all this, we’re probably going to witness a very close battle inside the octagon, but who’s going to win? Top MMA sportsbooks favor Borralho and we can only agree with them.

The cousin of UFC legend Khabib Nurmagomedov is fighting his sixth fight in the promotion this Saturday. Said is 15-2 in his professional career with a 4-1 record in the UFC. His most recent fight saw him beat Cody Stamann by submission, for which he earned the Performance of the Night bonus.

Nurmagomedov’s next opponent is Douglas Silva de Andrade, an MMA veteran who is 28-4 overall. The guy’s been in the UFC since 2014, winning six and losing four fights along the way.

Since coming to the UFC in early 2021, Jared Vanderaa has lost four of his five fights. The only fighter he’s defeated so far in the promotion is Justin Tafa (by decision). Even though his UFC record is far from impressive, the fact is that Vanderaa has fought against some real elite fighters – Sergey Spivak, Alexander Romanov, Andrei Arlovski, and Alexey Oleynik.

Vanderaa has a good opportunity to salvage his UFC career by getting a win on Saturday. It’s because his opponent is Chase Sherman, whose form is even worse. This guy lost his previous four UFC fights.

Jamie Pickett is 13-7 overall, with a 2-3 record in the UFC. This year, he’s already fought two UFC bouts, beating Joseph Holmes in January, and losing to Kyle Daukaus in February.

Oddsmakers think he’s going to win on Saturday, the main reason being that his next opponent doesn’t have too impressive a portfolio. In fact, Denis Tiuliulin is 9-6 overall, with just one fight fought in the UFC. The fight in question happened in March, when he lost to Aliaskhab Khizriev by submission.

May 14, 2022, was when Michael Johnson finally put an end to his four-fight losing streak. As a result, his overall record is now 20-17. Unfortunately for him, bookmakers think he’s going to lose again. This Saturday, he’s taking on Jamie Mullarkey, who is 14-5 in his pro career.

Even though he lost in his previous fight (to Jalin Turner at UFC 272), Mullarkey did win the two fights before, both by KO/TKO.