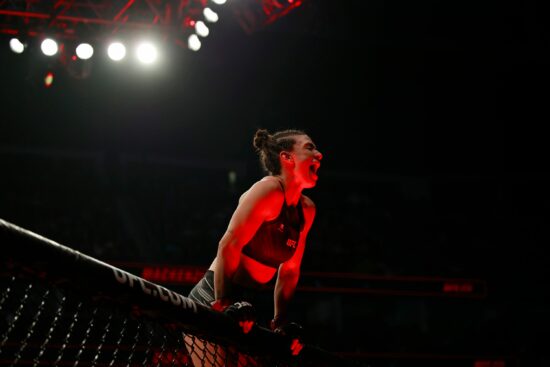 If you’re in search of some UFC predictions, look no further – Vegas Odds has you covered.

Following a two-week break, the UFC is set to return to the promotion’s state-of-the-art Apex Centre in Las Vegas for a Fight Night headlined by women’s strawweights Mackenzie Dern and Xiaonan Yan.

UFC Fight Night Dern vs Yan: How to Watch and Start Times

Mackenzie Dern vs Xiaonan Yan is a typical clash between a grappler and a striker. Dern is a grappling expert, who used to practice Brazilian Jiu-Jitsu and submission grappling for ages before switching to mixed martial arts, winning a number of gold medals along the way.

Since becoming a mixed martial artist in 2016, her record is 12-2, with seven of those wins happening via submission. The other five happened by points, while she’s still without a win by knockout/technical knockout.

It’s just the opposite when it comes to Yan, who’s 15-3 overall with seven wins by KO/TKO and eight by decision, with no submission wins.

So which fighting style will prevail in the headliner of the UFC Fight Night 211? We think it should be Dern’s.

Francisco Trinaldo is an MMA veteran who’s already 44, and who’s been fighting professionally since 2006. His record is 28-8, with most of his losses happening in the previous decade. Actually, he’s suffered just two defeats since turning 40, while winning six fights. Most of those wins happened by decision, suggesting that he still has the stamina for marathon fights.

Unfortunately for him, so does his next opponent, Randy Brown, who’s 12 years his junior. Brown is 15-4 overall, with a 9-4 record in the UFC. Five of his 13 UFC bouts went the distance, including the previous two times when he was in the octagon.

We think the Trinaldo vs Brown fight will go the distance as well. But who will win? We think it can go either way really, but if we had to pick one, we’d go for Brown.

Raoni Barcelos is an established grappler and wrestler, who’s been doing great striking-wise since becoming an MMA pro. So far, he’s 16-3, with 50% of his wins happening by KO/TKO.

This Saturday, he’s taking on Trevin Jones, who’s also a well-rounded fighter with amazing stamina. Jones’ record, however, isn’t as impressive as Barcelos’. He is 13-8-1 right now.

Anything can happen in a fight like this, but we think Barcelos is slightly better than his opponent. Still, he doesn’t look superior enough for us to back him with a lot of money. Instead, our pick is that the fight will last for all three rounds.

Sodiq Yusuff (12-2) is given the shortest odds of all the fighters that will go inside the octagon on Saturday. Priced at -1200, he’s expected to have an easy job against Don Shainis (12-3).

Although Shainis doesn’t have a much worse record than Yusuff, the thing is that hasn’t yet fought in the UFC. In fact, he’s making his promotional debut on Saturday.

Yusuff, on the other hand, has been in the UFC for almost four years. He got his contract after beating Mike Davis in Dana White Contender Series 14. Since then, he’s 5-1, with three wins by decision and two by KO/ TKO.

We think he’s going to record his third knockout win in the UFC this coming Saturday.

John Castaneda is 19-5 in his professional MMA career with a 2-1 win since joining the UFC. He’s a well-rounded fighter who tends to land a lot of strikes, which is something that should worry his next opponent.

The thing is that Daniel Santos takes 8.47 significant strikes per minute, which is almost two times as Castaneda. On the bright side for him is that he seems to have a strong chin, the evidence being that he’s still without a knockout loss in his career. In fact, he is 9-2 so far, with both of his losses happening via decision.

Still, the fact is that he hasn’t fought against such a good opponent as Castaneda. That said, we expect to see “Sexi Mexi” get his job done before the final bell.

Here’s a fight that could be voted the Fight of the Night. Why? Because both Davis and Borshchev are aggressive fighters who usually land (and receive) a lot of strikes. Each fighter also likes finishing fights early.

We expect this fight to finish in under three rounds as well, almost certainly with a knockout. But who will KO who? Our vote goes to Davis as he simply has a better portfolio than his next opponent.