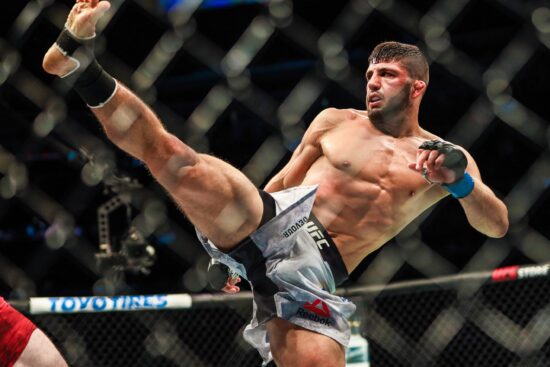 If you’re looking for the best UFC predictions, you’ve definitely come to the right place.

The UFC returns to Vegas on Saturday, June 25, with an event titled UFC on ESPN: Tsarukyan vs. Gamrot (also known as UFC on ESPN 38 or UFC Vegas 57). The headliner bout is a duel between two fighters that are very fun to watch, each with two ‘Performance of the Night’ bonuses won within the last two years.

The lightweight fight between Arman Tsarukyan and Mateusz Gamrot is the most entertaining bout of the evening, but others mustn’t be overlooked either. In addition to the main fight, UFC on ESPN 38 brings us another five main card fights, as well as six preliminaries.

UFC on ESPN 38: How to Watch and Start Times

Arman Tsarukyan’s Vegas odds make him the favorite in the headliner bout of UFC on ESPN 38. The main reason is that his record is nothing short of impressive with 18 wins and just two losses. One of those two defeats happened in his UFC debut in April 2019 when he lost to Islam Makhachev by decision.

Since then, however, Tsarukyan has won every single UFC fight, receiving a Performance of the Night bonus in each of his previous two fights. Speaking of which, Mateusz Gamrot has also won the bonus on two occasions, both happening in 2021.

The former KSW champion is 3-1 since coming to the UFC, while Gamrot’s overall record is 20-1. His only defeat happened in October 2020, when he lost to Guram Kutateladze by decision.

Knowing all this, it’s very likely we’ll see the two fighters exchange hits throughout the fight. As they’re both super-determined to show the world they belong in the UFC, you can be certain each fighter will give his utmost on Saturday. That said, it wouldn’t be a surprise if the fight went the distance. But who’d win in that case? Oddsmakers think of Tsarukyan as the favorite, and we have to agree.

Neil Magny’s been fighting under the UFC banner since 2013. His opponent, Shavkat Rakhmonov, joined the promotion in 2020. However, unlike Magny who is 26-8 (19-7 in the UFC), Rakhmonov is still without a single loss in his career.

As per the odds offered by top MMA sportsbooks, Rakhmonov is likely to stay undefeated for another event. The bookies are giving -400 on the Kazakh fighter, making him one of the biggest favorites of all the fighters on the main card.

Sure, he’s been nothing short of impressive, but Rakhmonov still hasn’t fought against a high-profile fighter as Magny. The American has the skills, as well as the experience needed to upset the odds.

Josh Parisian is 10-5 in his professional career with his UFC record being 1-2. His next opponent is even worse when it comes to the UFC. Although he’s 8-3 overall, Alan Baudot is still without a single win in the UFC after three fights (two losses and one no contest).

Knowing this, it’s clear that their fight on Saturday could decide their UFC destiny. The one who loses probably isn’t going to get his contract renewed. So, who’s going to be Parisian or Baudot? It seems as if it’s a 50-50 chance for each fighter to win, but if we had to pick one, we’d go for Parisian.

After two losses in a row, Thiago Moises is looking to bounce back with a win over Christos Giagos this coming Saturday.

His opponent also has experience fight fighting elite fighters, although he doesn’t have too many big wins in his portfolio. In fact, his 2021 win over Sean Soriano by technical submission is probably Giagos’ best performance to date.

Nate Maness joined the UFC in the summer of 2020, and since, he’s won three fights. He would love to stay undefeated in the promotion, but it won’t be easy as his next opponent is a fighter who’s without a loss in his entire career.

The man in question is Umar Nurmagomedov, a cousin of lightweight GOAT, Khabib Nurmagomedov. Umar is 15-0 overall, with two UFC wins so far, both happening by submission. We think something similar might happen this Saturday.

Although he’s turning 35 in July, Chris Curtis is a UFC newbie, who’s fought only twice in this promotion. He won both of those fights and is favored to add another win to the list.

The trouble is that he’s locking horns with a grappling expert Rodolfo Vieira, a former wrestler whose MMA record is 8-1. Four of those wins happened in the UFC, which makes us think he could do it again.