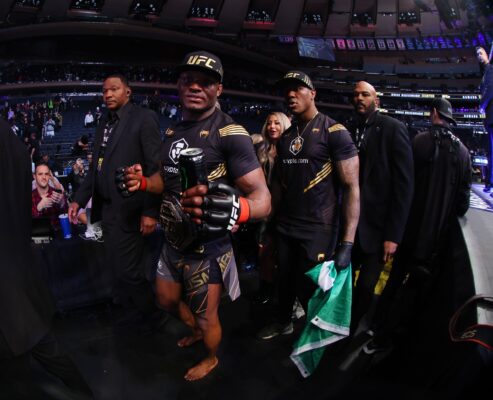 If you’re after some UFC predictions – look no further!

The UFC is taking the show to Utah this weekend. Vivint Arena in Salt Lake City is the venue that will host the event, which will see a welterweight title showdown between champion Kamaru Usman and British contender Leon Edwards, headline.

Will Usman be able to defend the title for the sixth time in a row? That’s the question we’ll try to answer in our UFC 278 prediction piece.

In addition to analyzing the Usman vs Edwards 2 fight, we’ll also preview each of the other four fights on the main card.

UFC 278: How to Watch and Start Times

Kamaru Usman is only a few wins away before he can make a legit claim to the GOAT status in the welterweight division. He is 20-1 in his career, with his only loss happening back in May 2013 in what was only his second pro fight.

He came to the UFC in 2015, winning every single fight since, including seven title fights. He’s been in the possession of the UFC Welterweight title since 2019 when he took the championship belt away from Tyron Woodley.

The only welterweight fighter with a more impressive portfolio is Georges St-Pierre who had a 25-2 record in this division before moving to middleweight and subsequently retiring from professional MMA.

So, can Usman surpass St-Pierre? Everyone who’s watched his recent UFC fights would probably say yes.

‘The Nigerian Nightmare‘ has been nothing short of impressive in each of his title bouts, which has pushed him all the way to the top of the UFC pound-for-pound rankings. So far, Usman has defeated a number of elite welterweights, most notably, Colby Covington (two times), who’s currently no.1 in the divisional rankings.

Usman is a well-rounded fighter who’s got plenty of weapons in his arsenal. He’s got 10 finishes in his portfolio, nine of which happened via knockout. This, however, doesn’t mean he’s not great in grappling/wrestling. It’s just that he hasn’t had much need to use those skills to finish his opponents.

What’s interesting is that most of Usman’s wins happened via decision, which is proof that he’s a patient fighter with amazing stamina. That’s the method that brought him the win in the first fight against Leon Edwards (19-3). We think the same might happen on Saturday.

Sure, Edwards has improved a lot since their first bout and is now one of the best welterweight fighters in the world. Unfortunately for him, he’s not the very best. Instead, it’s Kamaru Usman.

There are so many similarities between Paulo Costa and Luke Rockhold. For example, both fighters are coming off two losses. Further, for each fighter, their most recent fight was a light heavyweight debut.

Then, there’s also the fact that both fighters have fought title bouts in their career. Costa fought (and lost to) Israel Adesanya in the UFC Middleweight Championship fight in 2020. Meanwhile, Rockhold fought for the title three times, winning one in 2015, but losing the next two.

Knowing this, it’s clear that their fight on Saturday can go either way. Still, our vote goes to Costa, the reason being that his opponent hasn’t been inside the octagon for more than three years. It was July 2019 when Rockhold got KO-ed by Jan Blachowicz in his light heavyweight debut.

Costa, on the other hand, has fought three times during that period, with his most recent fight happening last October.

José Aldo is a UFC veteran who is 31-7 in his professional career. He even used to hold the UFC Featherweight Championship in the past, although he’s been without the title belt for more than five years.

Aldo’s got the experience on his side, but the question is whether he’s got the stamina to deal with such an athletic fighter as Merab Dvalishvili.

This guy tends to take his fights to the distance, making plenty of takedowns along the way. It’s going to be a fantastic fight, but we do think Dvalishvili will triumph in the end.

After five straight wins (two of which earned him the ‘Performance of the Night’ bonus), Marcin Tybura’s superb run ended last October when he lost to Alexander Volkov. Are we going to see him get back to the winning track this Saturday? Not if you’re asking Alexander Romanov, a fighter who’s still without a single loss in his pro career.

Romanov is a big and strong fighter who likes to take the game to the floor, which explains why nine of his 16 wins happened by submission. When it comes to Tybura, he’s a fantastic striker who likes finishing his opponents with KO/TKO.

Unfortunately for him, Romanov seems to do well when fighting against strikers as evident from the fact that in his previous two fights, he defeated Jared Vanderaa and Chase Sherman.

Tyson Pedro is 8-3 in his career, with all three losses happening within his previous five fights. His most recent fight, however, saw him win against Ike Villanueva by knockout in Round 1. That’s probably the no.1 reason why oddsmakers see him as the favorite in the fight against Harry Hunsucker.

Another reason behind this is that Hunsucker’s pro record isn’t too great. He is 7-5 so far, coming to Utah after back-to-back losses, both of which happened by KO/TKO. Still, to be fair to The Hurricane, he did lose to two elite fighters – Tai Tuivasa and Justin Tafa. Unfortunately for him, we think he’s going to lose again. Pedro just seems like the better fighter.