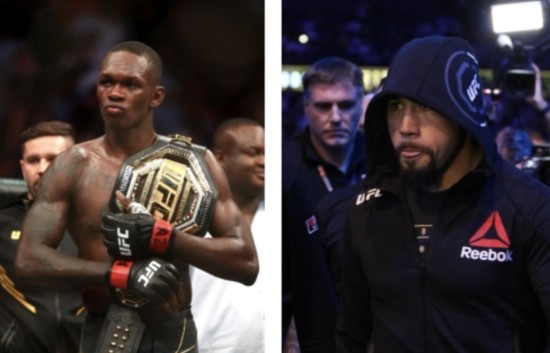 Following recent reports that heavyweight champion Francis Ngannou and interim heavyweight champion Ciryl Gane are set to meet at UFC 270 on January 11, 2022 – the pay-per-view is now also expected to showcase a middleweight title rematch between Robert Whittaker and Israel Adesanya, as per La Sueur.

Adesanya claimed UFC middleweight gold after knocking Whittaker out in 2019.

Since then the impressive New Zealander has gone on to defend the title three times, with wins against Paulo Costa and Yoel Romero included.

However, with it clear that Whittaker poses the greatest threat to Adesanya’s reign at 185 lb, Dana White has been left with little option but to rematch the pair.

Since losing his title two years ago, Aussie-born all-rounder Whittaker has gone on an absolute tear.

Currently, on a brutal three-fight win streak, ‘Bobby Knuckles’ is now expected to get his shot at redemption during the first month of 2022.

Whittaker vs. Adesanya 2: What the Oddsmakers are Saying

Despite recently moving up to face Jan Blachowicz for the UFC light heavyweight title, online oddsmakers still view Adesanya as a clear favorite when it comes to rematching against Whittaker.

The pair’s first encounter is arguably the reason for the oddsmaker’s thinking though – having unleashed a brutal second knockout on his Aussie rival, Adesanya looked close to unbeatable.

However, as briefly mentioned earlier – Whittaker is still one of the sport’s best and his current run of red hot form makes him as dangerous as ever.

Nevertheless though, as displayed below, it’s not hard to see which fighter the oddsmakers are leaning towards.