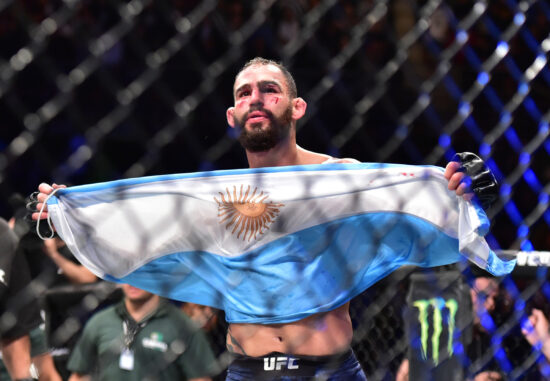 Since bursting onto the scene, the South American has gone on to rack up 10 wins, including victories over Court McGee, Mike Perry, and Neil Magny.

However, despite boasting an impressive 24-4 overall professional record, Ponzinibbio’s time in the big leagues hasn’t all been straightforward.

Several health issues, including a nasty bacterial infection, have kept him sidelined for nearly two years.

Following his long-awaited return to action, the Argentine brawler came up short earlier this year when he fought Jingliang Li.

In light of his loss against Li, coming into last weekend’s bout against Baeza, the pressure was piled on the South American’s shoulders.

However, with Ponzinibbio coming out on top during the promotion’s most recent event, the South American certainly appears to be back and hot on the heels of the illustrious 170lb title.

‘Fight of the Year’ Contender Sees Ponzinibbio Back in Title Contention

Ponzinibbio’s three round brawl against Baeza had it all.

If the fight, as a whole, doesn’t go down as the best fight of the year, the bout’s third and final round will certainly be remembered as one of the most enthralling back and forth encounters in recent history.

The main-card matchup saw Ponzinibbio open as a slight betting favorite, however, punters would have been worried after the fight’s opening round.

Baeza made it clear his intentions were to chop away at his opponent’s lower legs which did appear to be working in the bout’s earlier stages.

However, clearly determined to make a statement, Ponzinibbio bit down hard on his gum shield and began trading some heavy blows.

The fight’s third round saw both fighters leave everything on the line in a contest that fans will be forgiven for not wanting to end.

With the nail-biting fight eventually going the distance, it would be on the judges to pick apart 15-minutes of all-out action.

After deeming Ponzinibbio to be the fight’s more offensive and damaging fighter, the ‘Argentine Dagger’ was awarded a well-deserved unanimous victory.

Speaking in the promotion’s scheduled post-event press conference, as quoted by MMA Fighting, Ponzinibbio, when asked for his thoughts on his win, admitted it his victory over Baeza was vital.

I needed that. I needed 15 minutes to show what I can do. I’m still here to fight with the best fighters in the world. This is like to prove tonight.

Santiago Ponzinibbio on his recent win over Miguel Baeza

Going on to call out which opponent he’d like to face next, the 34-year-old went on to the record to publicly name two of the division’s top contenders.

I know who I am. I know I can be champion of the world.

I need to come here and show what I can do. For this reason, I don’t care. [I told the UFC] I’d like to be back as soon as possible, they said ‘we have this kid in June, nobody like to fight this kid,’ I said give me. I’m going to beat this guy.

I’d really like to get back to the rankings,” Ponzinibbio said. “They give me a tough guy. Maybe, Vicente Luque, he’s [doing] very well, we can do an exciting fight. I respect him a lot. I think we can do a great fight. Maybe the guy that loses between Stephen Thompson and Gilbert Burns For the guy that’s going to win, [they’re] probably going to go to the belt. The guy that loses between them is a really good fight for me.

Show the world I am back. I can be champion of the world. I can stay with the best fighters in the world. For sure, I’m going to do an exciting fight again.

Santiago Ponzinibbio on who his next opponent could be