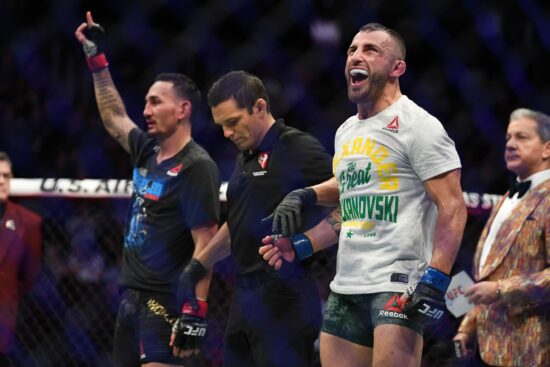 Assuming Amanda Nunes is granted an immediate rematch against Julianna Pena and reclaims the bantamweight title, the pressure on the UFC to match the two-time and two-weight Brazilian champion against pound-for-pound queen Valentina Shevchenko for a third time will undoubtedly mount.

Nunes and Shevchenko have already fought twice with the South American coming away victorious by way of the judge’s scorecards on both occasions.

However, despite Nunes boasting two wins out of two against Shevchenko, the pair’s second encounter was particularly close with many fight fans feeling the flyweight champion did enough to get her hand raised.

To summarise, should Nunes right the wrongs from last month’s monumental upset against Pena, the UFC will only really have one of two ways to go when it comes to the Brazilian’s next step – either bring PFL champion, Kayla Harrison, over the big leagues and set up a promotion vs. promotion blockbuster or give Shevchenko a chance to make it third time lucky.

It is rare that trilogy bouts occur after one fighter has lost both previous bouts.

After losing his title to the dominant Aussie at the end of 2019, Holloway has gone on a formidable run with a duo of convincing wins coming against Calvin Kattar and most recently Yair Rodriguez.

Volkanovski has been equally as impressive with his latest title defense coming against Brian ‘T-City’ Ortega at UFC 266.

With Holloway comfortably the division’s top contender, there is very little argument against the UFC awarding him with a third title shot in 2022.

After vacating his light heavyweight title nearly two years ago, Jon Jones, who is arguably the best mixed martial artist to ever grace the UFC, has flirted with the possibility of moving up to challenge at heavyweight.

However, despite multiple hints, ‘Bones’ has yet to make an appearance at 265 lb but that could all be set to change in 2022.

As current champion and the promotion’s hardest hitter Francis Ngannou prepares for his first title defense against very technical interim champion Ciryl Gane at UFC 270, fight fans have been left to wonder where Jones fits into the heavyweight equation.

There is no denying that both Ngannou and Gane would pose Jones a totally different challenge. Seeing how the American great would fare against the vicious power of Ngannou is equally as intriguing as seeing the potential chess match play out against Gane.

However, one thing is for sure – regardless of which fighter comes away victorious at the end of the month, Jones’ introduction to the heavyweight division should not be against any opponent other than the champion.

Following a hugely controversial ending to their UFC 259 bout that saw Russian striker Petr Yan gift the bantamweight title to Aljamain Sterling following an illegal knee, the 135 lb division has been in turmoil ever since.

Although originally scheduled to rematch one another at UFC 267 last year, forced to withdraw due to injury, Sterling kept hold of his title while Yan went on to face and defeat Cory Sandhagen for the interim belt.

With Yan now holding the interim belt and although it is tempting to pretend Sterling is not the champion at all, the UFC know that they cannot bypass the outright titleholder and will therefore require him to face Yan as quickly as possible in order to get the division moving again.

Should Yan go on to reclaim the 135 lb title, the Russian would then set up a mouth-watering encounter against former two-time champion T.J Dillashaw.

Currently unbeaten with an overall professional record of 10-0, there is no denying the hype riding on Sweden’s Khamzat Chimaev.

Despite being sidelined for the majority of 2021 following a nasty but of COVID-19, Chimaev returned to action recently to put in an incredible display against China’s Jingliang Li.

After claiming a first-round submission victory against Li, Chimaev, who is now ranked number 10 in the welterweight division, is certainly set for a blockbuster 2022 and while a title shot may await, first up for the European grappler should be former two-time title challenger Colby Covington.

Let’s be honest – it makes sense!

It’s hard to put a case forward for Covington to get a third shot at champion Kamaru Usman before the likes of England’s Leon Edwards.

Covington is likely to need at least one more notable win before he can put a title case forward and when it comes to Chimaev, given how much of an exciting prospect he is, it is only going to be a matter of time before he reaches the upper echelons of the 170 lb division.

So let’s watch Usman try and defend his strap against Edwards before Chimaev and Covington have a firefight for the right to be crowned the welterweight division’s next top contender.