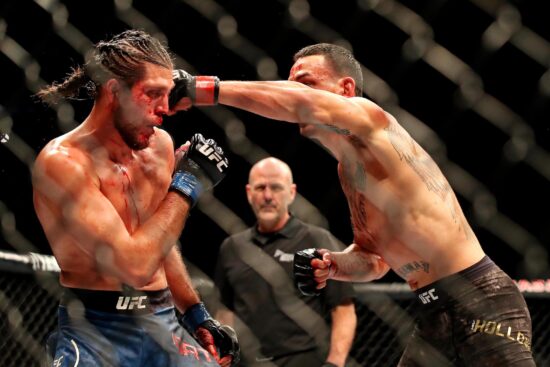 This weekend will see one of the best cards of the year take place at the T-Mobile Arena.

Elsewhere, the top of the card is set to see featherweight rivals Alexander Volkanovski and Brian Ortega go toe-to-toe for the chance to be crowned the king of the 145lb’ers.

However, despite Saturday night being the biggest moment of his career, challenger Ortega is already plotting his next move, regardless of the outcome of UFC 266’s main event.

Speaking recently to TMZ Sports, ‘T-City’, who suffered a brutal TKO loss against Holloway back in 2018, admitted that a future rematch against ‘Blessed’ would be ‘ideal’.

That would be ideal [rematch vs. Holloway].

I’m not trying to speak ahead or get past Volkanovski because he beat Max twice, so I’m not here to already start celebrating but that would be ideal.

I’m a better person, better fighter than I was when I fought him and watching his last fight, so is he.

You always want that. As a fighter, as a competitor, you always want to make that sh*t square or to say, ‘Yo dog, you know what? You legit got the best of me. Good sh**’