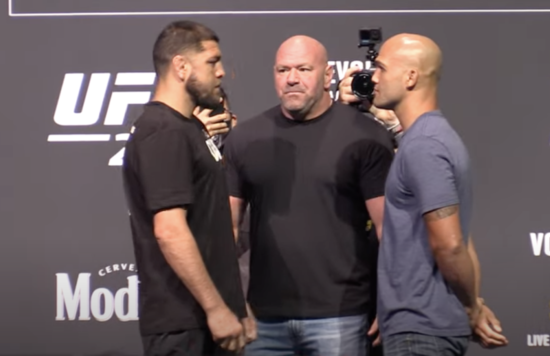 Ahead of what is one of the most highly anticipated matchups on UFC 266’s main card, veteran brawler Nick Diaz will be making his long-awaited comeback when he faces ‘Ruthless’ Robbie Lawler in a five-round non-title fight this weekend.

Having not been inside the octagon for nearly seven years, Diaz, 36, will be looking to claim an impressive win, even if fighting isn’t something he loves doing.

With this weekend’s UFC 266 now just over 24 hours away from kicking-off, fight fans have been given their first glimpse of the pair coming toe-to-toe.

Squaring up to one another at the UFC’s face-offs, Diaz and Lawler starred one another down ahead of what is expected to be a truly great fight.