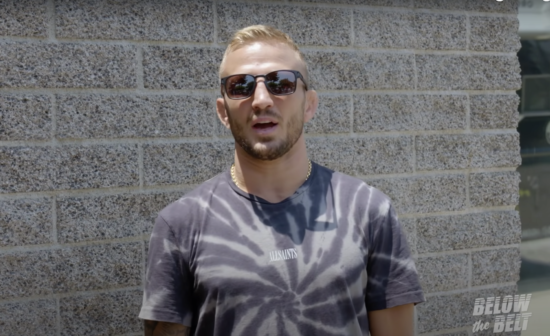 Image courtesy of Below The Belt: Food Truck Diaries on YouTube

Despite being one of the best mixed martial artists to ever grace the octagon, TJ Dillashaw has recently seen his legacy tainted following a failed drugs test two years ago.

In light of his loss against then-flyweight champion Henry Cejudo, Dillashaw, who was looking to become a two-weight class champ, tested positive for EPO – a highly banned substance in competitive MMA.

With his ban now served, Dillashaw is preparing to return to action on the weekend, where he will meet rising star Cory Sandhagen in the latest Fight Night’s main event.

However, while many are undoubtedly, and perhaps rightfully, questioning the American’s history of fighting clean, the former 135lb champ has reassured fans that USADA, the sport’s doping agency, has closely monitored his historic test samples.

Speaking to Brendan Schab on the latest edition of the Food Truck Diaries, Dillashaw lifted the lid on just how vigorously the regulatory body has looked into his past performances but has also admitted he has no one else to blame but himself.

People can go say whatever they want, and more power to them, that’s the decision I made, but USADA actually put me under a microscope after I got in trouble, man.

They went back to all my fights that they ever collected my samples and retested all of them all the way back to my (Raphael) Assuncao fight after (Dominick) Cruz because they keep an A and B sample every time you get tested.

No matter what, it’s going to be like that. I made the mistake. That’s like USADA’s weapon to use against you, to really slander you so no one else wants to do this sh*t.

Those questions are valid because I f***ed up, I made the decision. But me being able to live with that, me owning up to it has made it f***ing easy.