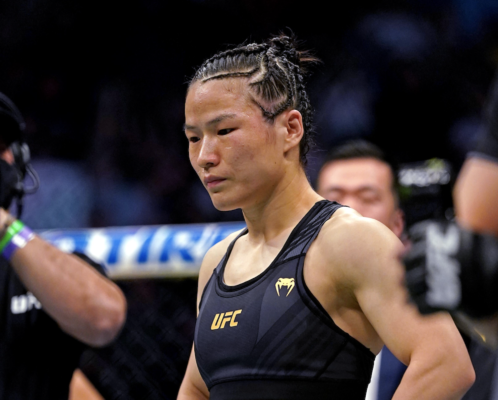 With the pair first matched against one another during UFC 261 earlier this year, the lead-up to the event saw Namajunas say “better dead than red” – an anti-communism remark which was prominent during the Cold War in the 1950s.

Having faced off against Namajunas during UFC 261’s co-main event, Zhang saw her title ripped away after ‘Thug Rose’ landed a devastating head kick in the bout’s very first round.

However, fast forward several months, and the pair are set to meet each other again.

UFC 268 next month will see two rematches headline – welterweight champion Kamaru Usman will face long-time rival Colby Covington in the main event, with Zhang and Namajunas serving as the co-main.

Speaking ahead of the eagerly anticipated female showdown, Zhang, who spoke on MMA Fighting’s ‘The MMA Hour‘, revealed just how badly Namajunas’ previous comments affected her.

I think it definitely affected me a little bit.

The comments that Rose made, I think she was successful in making the audience boo me. But I think that’s my own problem because I should be concentrating on the fight and not the audience.

I can’t control who the audience likes. So I’m becoming more focused on my own fight.

In my mind, I think that, yes, those comments crossed the line because I think all the audience, all the fighters, we all come together in the UFC because we all share the passion of the MMA sport.

In my mind, I’m coming here because I want to make friends because we all have the common love of martial arts.

I think it’s not a good thing to mix sport with politics, but I think that’s maybe her plan.

So in the beginning, I thought it was just kind of trash talk. It really didn’t affect me.

But when I went out in the stadium and got booed, I think Rose wanted to use those comments to make the audience boo me.