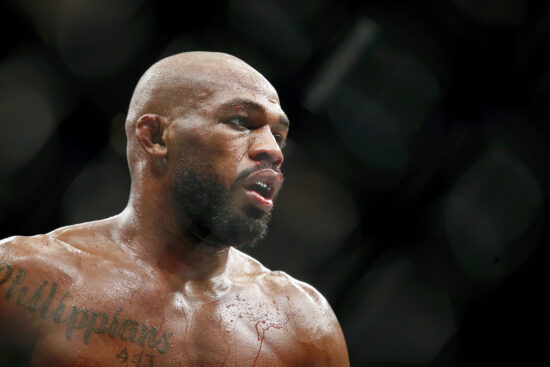 UFC star Jon Jones was arrested in Las Vegas last Friday following his induction into the promotion’s Hall-of-Fame for his memorable 2013 fight against Alexander Gustafsson.

It was reported that the former light heavyweight champion’s charges included battery domestic violence and injuring and tampering with a vehicle.

The shocking news prompted UFC president Dana White to issue a statement claiming he is not surprised by the pound-for-pound great’s recent run-in with the law.

Now several days on since Jones’ most recent arrest, new details (MMA Fighting) have emerged about exactly what happened after the star had left the UFC’s Hall-of-Fame event.

It has been claimed that police were called to Caesars Palace after one of Jones’ children asked security to call 911.

A woman, understood to be the fighter’s longtime domestic partner, spoke with police and explained Jones had returned to the hotel room and was “not very happy.”

Jones is reported to have pulled at her hair and prevented her from leaving the room – upon inspection by the officers in attendance, the woman was said to have had a swollen lip and blood on her clothes.

The Las Vegas police’s report also notes that the woman seemed “scared to even talk about” Jones.

Last Friday was not the first time the talented mixed martial artist has been in trouble with the police.

2012 saw the American arrested following a DUI and convicted for his part in a hit and run just three years later in 2015.

Following an event that is likely to tarnish his reputation even further, Jones, who is waiting to make his UFC heavyweight debut, has broken his silence.

Taking to popular social media platform Instagram, ‘Bones’ posted an image on his story which contained a series of captions as well as an image depicting him back in the gym.

The captions read: “I have way too much trauma to consume alcohol, my brain simply can’t handle it anymore. I will leave alcohol in my past forever.

“Turn this nightmare into the best thing to ever happen in my life.

“Get right back on my horse.

“Now is the time to work harder than ever.”