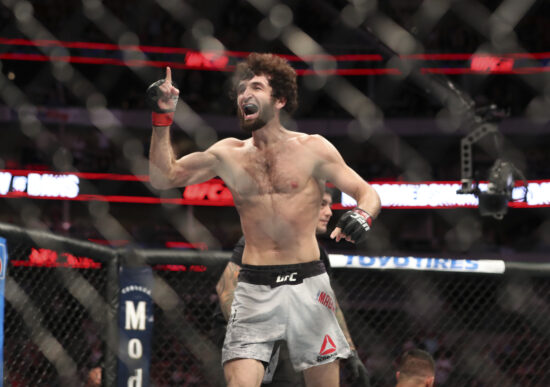 According to recent reports, UFC featherweight Zabit Magomedsharipov is considering leaving the promotion.

Magomedsharipov, 30, is one of the hottest prospects to emerge in the UFC in recent years.

With an unorthodox style of Sanda fighting, the Russian 145lb’er is best known for his unpredictability inside the octagon.

In fact, such is Magomedsharipov’s popularity among fight fans, many still believe his brawl with heavy underdog Kyle Bochniak in 2018 to be one of the best MMA fights of all time.

Sitting pretty, unbeaten with a 6-0 record in the UFC and an 18-1 professional record overall, the Ricardo Almedia trained striker is easily one of the most exciting fighters currently on the roster.

However, despite fighting six times since his promotional debut in 2017, Magomedsharipov is struggling to tie down his next opponent.

Having not fought since he beat Calvin Kattar at the end of 2019, there are still no signs of who could be next up for Magomedsharipov.

Several attempts have been made to agree terms with fellow contender Rodriguez, however, each time, the Mexican striker has pulled out.

Seemingly left in an awkward situation and with no new bout confirmed, Magomedsharipov has recently seen his name removed from the UFC’s official weight-classes rankings due to inactivity.

It is not yet known whether or not Magomedsharipov and Rodriguez will be able to finally reach a fight agreement, however, as often seen in the bizarre world of mixed martial arts, if it’s not meant to be – it seldom is.

Ready to Walk Away?

According to a recent report from Russian outlet Tass, Magomedsharipov has been left so frustrated by the promotion’s efforts to secure him another bout that he is now considering walking away.

The outlet claim to have spoken to a source close to the fighter, who said it’s entirely possible fans may never see Magomedsharipov in the octagon again.

With a high degree of probability, Zabit will no longer fight.

Of course, it goes without saying, this could be a strategically placed quote from Magomedsharipov’s entourage, designed to speed up the UFC’s matchmaking plans.

Nevertheless, though, fans will be left sweating on whether or not they’ll get to see the Russian featherweight back in action later this summer, or even again at all.

The UFC currently has nine confirmed events between June and the start of September – so there is still plenty of time and space to book Magomedsharipov.

The only question really left to answer is, who, among the promotion’s featherweights, is prepared to step up and face one of the most dominating 145lb’ers in the world.