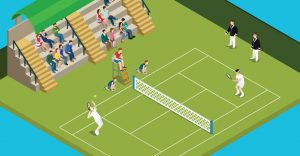 The US Open raises a lot of attention as always. But this edition will be a little bit different, due to the Coronavirus, and the fact that Rafael Nadal and Roger Federer won’t participate in it.

The question is, will anyone stop Novak Djokovic from reaching yet another title here? The Serb bounced back following the pause of the activities, picking up where he left, smashing rivals and winning trophies. He is the absolute favorite according to all the bookies and sits far ahead of the entire competition. The young lions, are hoping to upset the 17-time Grand Slam champ, and get their first chip. But that won’t be easy at all. It is good for them that several top players won’t appear, making their path to the finals stages much easier.

Number Four For Novak or Maybe Not?

The Serbian player, didn’t lose a single match in 2020. So far, he has 23 wins, with the latest one taking place yesterday evening against Milos Raonic in the Western and Southern Open finals. That victory clinched Djokovic his second title in Cincinnati, 35th overall at the ATP Masters 1000. Right now, he is tied with Nadal for the most in this category.

But there is one other record he set. He became the first player to win all Masters tournaments at least twice. No need to remind you that he is the only one who collected each one.

So the question here is, can anyone stop him? The Joker might be a little bit tired because of the last two matches in Cinci where he went through a lot of trouble, and has some issues with his neck. But then again, we saw Novak fighting such adversities a million times.

Medvedev already reached the finals here, but lost in the end to Nadal. Tsitsipas is a tough nut to crack, and Novak knows that, while Thiem already defeated Djokovic in big matches.

According to many, these three guys have the best prospects of beating Novak, and it seems that they come to New York in top shape.

Of course, there are some dark horses like Alexander Zverev, or even Raonic, who was superb in Cincinnati, indicating that he might be the nicest surprise here at Flushing. Also, don’t forget Roberto Bautista Agut, who gave Novak enormous problems in the semis at W&O.

Rafael Nadal is the reigning champion here, but he is not competing, as we said. The Spaniard won twice in the previous three years, with Novak squeezing in his victory in 2018. Stan Wawrinka took the trophy the year before. It is interesting that Djokovic didn’t play the finals here just twice over the last nine years. Still, traditions and rules are there to be broken.