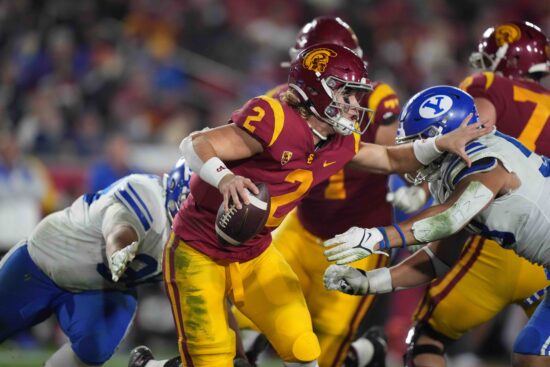 Even though this is Championship Saturday, there is still one regular-season game left. Neither one of these teams have anything left to play for this season as they are both 4-7 and not bowl eligible, but this game needs to be made up as part of a postponement on November 13. This game, if nothing else, can serve as a last-ditch effort for bettors to make their money back after the full slate of Championship Saturday games.

USC to Stop The Skid

The USC Trojans have lost their last three games have lost five of their past six games. This has not been an ideal season for the Trojans, but all they can do at this point is put their heads down, and go at the Golden Bears to end the season on a high note.

The USC Trojans’ offense is averaging 30 points per game on 447.1 total yards per game. Those 447.1 total yards break down to 301.4 passing yards and 145.7 rushing yards per game. The Trojans’ offense is led by their junior quarterback, Kedon Slovis. Slovis has completed 193 of 297 pass attempts for 2,153 yards while throwing eleven touchdowns and eight interceptions. When the Trojans aren’t attacking via the pass, they look to their leading rusher, senior, Keaontay Ingram to carry the load. Ingram has rushed for 911 yards on 156 attempts while finding the endzone five times this season.

California Looks to Win Back to Back Games

The California Golden Bears’ offense averages 23.7 points per game on 396.7 total yards per game. Those 396.7 total yards break down to 225.6 passing yards and 171.1 rushing yards per game. The Golden Bears offense is led by their senior quarterback, Chase Garbers. Garbers has completed 205 of 327 pass attempts for 2,354 yards while throwing sixteen touchdowns and eight interceptions. To complement Garbers passing attack, the Golden Bears turn to their sophomore running back, Damien Moore. Moore has rushed for 517 yards on 100 attempts while finding the endzone six times this season.

On the defensive side of the ball, the Golden Bears have been limiting their opponents to 23 points per game on 362.8 total yards per game. Those 362.8 total yards break down to 226.3 passing yards and 136.5 rushing yards per game. Like the Trojans, the Golden Bears don’t put a lot of pressure on opposing quarterbacks, forcing just twenty-one sacks and thirteen interceptions on the season.

Easily the most irrelevant game in terms of the seeding of the weekend is this matchup between the Trojans and Golden Bears. For bettors though, this could be their opportunity to come out on top after a tough day. Look for the Trojans offense to be too much for the Golden Bears in this matchup.