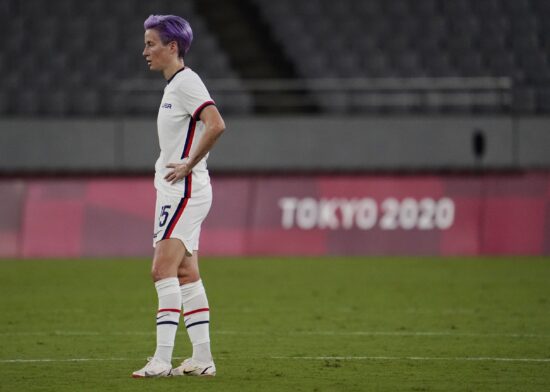 The current world champions were blown into pieces in the debut at the Tokyo Olympics. The Swedish national team was superior in all aspects of the game and simply rolled over the big rivals, against whom they have a long history.

This isn’t how the Americans imagined their start quest towards the first Olympic gold since London and the Olympics in 2012.

Goteborg’s forward was unstoppable today, packing two goals and making sure that the US players remember her name the next time they meet. Vlatko Andonovski’s girls didn’t have a solution for the Swedish player who netted in the 25th and the 54th minute.

The first goal was following Sofia Jakobsson’s cross, which fell perfectly on Blackstenius’ head. It was a logical development having in mind that the Swedish side opened the match much better.

Instead of laying back and waiting for the rivals’ mistake, Blagult’s players kept on at the same pace, having several more chances to score. Alyssa Naeher had her hands full in front of the goal, making five stops in the first half alone.

The US team also had one good chance to hit back, but Rose Lavelle’s header ended on the post. Blackstenius added another goal to her account in the 54th minute, once she reacted the best following a corner kick in a crowdy box.

Vlatko Andonovski made three changes introducing Alex Morgan and Megan Rapinoe on the pitch, but there were no results. The USA hit another post, and Rapinoe had a solid shot, but in the end, the Swedish team would score another goal to dismantle the rivals completely.

Lisa Hurting was on target, with a header in the 72nd minute.

Apparently, the Swedish side isn’t very suitable for the Americans, who played 12 matches in 2021, winning 11. The only opponent who left the field unbeaten against them was Sweden, 1-1 in April, in a friendly international.

This is one very big warning for the US team, who already experienced one hard blow in the previous Olympics. Back in Rio, Rapinoe and the rest of the crew came as the No.1 favorites but left the tournament already in the quarterfinals, which was their worst record ever.

Brazil and the Netherlands Go Strong

Brazil trashed China with 5-0, and the Netherlands humiliated Zambia, 10-3. These two teams were in the mood for destroying the rivals’ defenses today in Tokyo.

The Netherlands and Zambia played the most efficient match at the Olympics ever.

43-year old Formiga became the first-ever football player in any competition to participate in seven Olympic tournaments. Her teammate, Marta, also had a big milestone today, becoming the first player that scored in five consecutive Olympics.

Great Britain was better than Chille, 2-0, while Japan and Canada split each following a 1-1 draw.

In the “Down Under” derby, Australia posted a victory over New Zealand, 2-1.