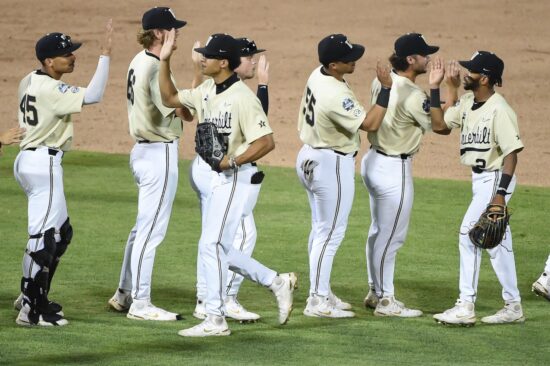 One big inning was all it took Monday night for Vanderbilt to take control of the College World Series. With an 8-2 win in game one, the 2019 champions can repeat with a win on Tuesday while Mississippi State tries to force game three on Wednesday. Game two is set for 7:00 p.m. ET on ESPN from TD Ameritrade Park in Omaha, Nebraska.

Teams winning game one have won 11 of the 17 finals since the format changed to a best-of-3 Championship Series in 2003. The Commodores are attempting to be the first repeat champions since South Carolina in 2010 and 2011. Vanderbilt had a chance to repeat in 2015 but lost to Virginia in the final.

The Bulldogs did take the lead in game one as Kamren James homered off Jack Leiter in the top of the first inning for a 1-0 lead. But from there on out, it was all Vandy. They silenced a heavy MSU crowd with a seven-run bottom of the first inning as Bulldogs starter Christian MacLeod lasted just ⅔ of an inning.

MacLeod walked two of the first three batters, and after Enrique Bradfield Jr. stole third, a hit batter loaded the bases. Another hit batter tied the game, and CJ Rodriguez singled home two runs with Vanderbilt’s first hit of the night. Isaiah Thomas doubled home another with two down, and MacLeod’s night was done.

Chase Patrick took over on the mound but was immediately tagged for a three-run homer by Jayson Gonzalez for a 7-1 Dores lead. The homer was the ninth of the season for Gonzalez, one of the best No. 9 hitters in the nation at .286.

Leiter settled in from there and struck out eight over six innings of work while allowing two runs on three hits. He wasn’t as effective as when he struck out 15 against NC State last Monday, but he still got the win and delivered what Vandy needed with 107 pitches. Nick Maldonado finished off the game with three shutout innings as he struck out four.

Neither team has announced a starting pitcher for Tuesday’s game yet. Both coaches have options, and Tim Corbin has the luxury of having a win in his back pocket while Chris Lemonis has to play for the win.

Vanderbilt could come back with 2019 CWS Most Outstanding Player Kumar Rocker (14-3, 2.52), but he would be on three days’ rest, having won against NC State on Friday. Rocker threw 111 pitches over six innings in that win, and he has 18 strikeouts in 11 ⅔ innings in the 2021 CWS.

If Corbin saves Rocker for Wednesday, his top options are freshmen Christian Little (3-1, 4.87) and Patrick Reilly (4-2, 4.89). Little started against Stanford on Wednesday in his first outing since May 26 and allowed four runs on four hits over three innings while striking out three. Reilly has not pitched since June 6 in the Nashville Regional against Georgia Tech.

Mississippi State used ace Will Bednar (8-1, 3.34) on Saturday, so he very likely isn’t available to start until a potential game three on Wednesday. Jackson Fristoe, who made 13 starts on the season, threw two relief innings on Monday and hasn’t started since June 7. That leaves Houston Harding (7-2, 3.10) as the likely starter.

Harding started Friday against Texas and threw 82 pitches over 4 ⅔ innings. He allowed three runs on four hits against the Longhorns while striking out four and walking two. He pitched in relief against Vanderbilt in April, allowing two runs on two hits over 1 ⅓ innings.

Another option for Lemonis is a bullpen game with closer Landon Sims starting, much like Arkansas did against NC State in the Super Regionals. Sims is 5-0 with a 1.52 ERA, and 12 saves on the season. His longest outing is four innings, done twice, most recently in the Supers against Notre Dame. Sims has 96 strikeouts in 53 ⅓ innings and could silence the Vandy bats early.

With neither starting pitcher known and the likelihood that Rocker and Bednar are saved for Wednesday, the pick here is the over. Both teams should come out swinging. Vandy is playing with house money tonight, and MSU is desperate with a large crowd to support them as most of the 24,000 at TD Ameritrade will be backing them.