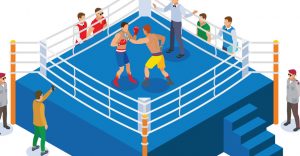 One of the best fighters on the planet is back in action this weekend, as Vasyl Lomachenko will be defending his WBA, WBO and The Ring lightweight titles at the MGM Grand. It promises to be one of the most exciting fights of the year, but will Lomachenko be able to solidify his place as one of the best pound-for-pound boxers in the world?

Vasyl Lomachenko vs Teofimo Lopez Tale Of The Tape

There is no second-guessing the pedigree of the Ukrainian champion going into this fight against Lopez. Lomachenko has held a dominance over the lightweight division since stepping up to this weight class back in 2016. He is yet to be beaten at lightweight, with his only defeat coming in the featherweight classification back in 2014 against Orlando Salido. Since that defeat, he has beaten over opponent that has been put in front of him.

His stock has soared to new heights over the past two years, as he has beaten Jorge Linares, Anthony Crolla and Luke Campbell. Ten of his 14 victories have also come by way of knockout, with only four wins coming through decision. The most recent of those decision wins came in his last fight at the O2 Arena in London against Campbell.

However, there was never any doubt about who was in control of that fight, as Lomachenko dictated the pact throughout and didn’t allow Campbell to get any big shots in. However, this grudge-fight against Lopez could be one of the most testing opponents that the Ukrainian has had in many years.

Lopez is regarded as one of the most exciting young fighters to have emerged in the United States. His amateur career was outstanding, as he won 150 of his 170 fights. He also has experience with fighting on the biggest stage, as he represented Honduras at the 2016 Olympics in Brazil.

Lopez’s professional career couldn’t have got off to a better start as he has a 15-0 record at present. He has won 12 of these fights by knockout, with only three victories coming by decision. He has fought five times in the past two years, with four of these victories coming by knockout. Lopez was only taken the full 12 rounds on one occasion, and that was by Masayoshi Nakatani back in July last year. His last fight was against Richard Commey, where he won in the second round to win the IBF lightweight title. However, Lomachenko is the most prolific opponent that he has come up against in his young career.

There is no doubting that Lopez has the ability to hurt Lomachenko, and he could use his height and reach advantage. However, Lomachenko is rightly regarded as one of the world’s very best and unifying the division will take him one step closer to showing that fact to be true. The Ukrainian will get the win, but the fight will likely go the distance.

Pick: Vasyl Lomachenko at -430 with BetUS.