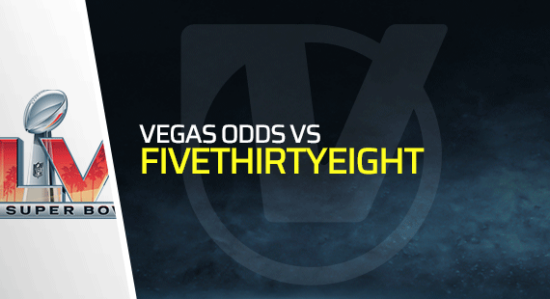 Accurately predicting the outcome of sports games or competitions is pretty much impossible, but that’s also why we love them so much – upset victories are always huge stories and by their very nature, difficult to predict.

Sportsbooks tend to be accurate with their odds when it comes to picking favorites, but there’s more than just the likelihood of a certain outcome that needs to be taken into account. If Bettors start to place a large number of bets on one outcome then the lines will shift to encourage betting the other way to ensure some kind of profit regardless of the outcome, and it’s why they aren’t always perfect.

There will be fans and bettors who prefer to use stats and prediction models to make their choices and in some ways, the logic does make sense. The problem is that it’s almost impossible to account for human error, nerves, or just a complete meltdown when the pressure is on, so they can also be caught out by freak events.

This year’s Super Bowl race could be one of the most exciting in years as every team appears to have some kind of flaw, and we’ve already seen enough upsets to suggest that no team can be fully trusted to get the job done.

To find the best value it’s often important to look at a variety of data, so here’s a comparison of the current Vegas Odds on the Super Bowl Winner with the percentage chance given by the prediction models on the excellent FiveThirtyEight.com:

We have seen a lot of talk about the Rams going all-in for a Superbowl after making big moves to bring in OBJ and Von Miller, but that made no difference last night as they struggled on both sides of the ball in a defeat to the 49ers.

Before that game, the Rams had odds of +700 and were given a chance of 10% to win the Super Bowl, but that defeat brought around a huge shift as their Vegas Odds drifted and their chances of success were cut to a measly 4% – Or the same as the New England Patriots.

Their loss also boosted the chances of every other team that’s named on the list, so it shows just how quickly things can change.

The Titans are given the joint-highest chance of success by the FiveThirtyEight model, but it’s hard to see them as the value pick when you consider all of the injury issues that they’re dealing with. At 8-2 they do lead the AFC rankings so they should win the division, while they also have to play the Texans twice, the Dolphins, and the Jaguars so the run-in doesn’t look too difficult.

Derrick Henry and Julio Jones are both on IR so that is a concern, while they likely would’ve lost to the Saints in Week 10 if they managed to convert their PATs, but they also destroyed the Rams so this is clearly a good team.

It’s almost a cliche now to talk about a team going to Foxborough and proving themselves to be contenders by knocking off the Patriots, but that is the situation the Titans face in Week 12 and a win there against an improving team would give more confidence in their ability to do something similar in January, but there’s just too much adversity for them to face to see them as the value pick just now.

In the Draft we often hear analysts talk about the “intangibles”, but that could also come into play here. It’s impossible to really measure how powerful a factor it could be, but don’t underestimate the power of Aaron Rodgers looking to stick a big ol’ middle finger up to the rest of the league by winning the Super Bowl after the events of last summer and the recent controversy over his vaccination status.

On the field, the Packers are dealing with injuries, but they are still winning games and have their best players returning at the right time, while it was also confirmed that Aaron Jones should only be out for a couple of weeks after going down recently.

In recent years the Packers have always been strong in the regular season before falling short in the playoffs, but in terms of form, odds, and the current “feeling” about them, they look like excellent value at +1000.

Buffalo are the current favorite with Vegas to hoist the Lombardi Trophy aloft in February, but they are still only given a 74% chance of winning the AFC East at this stage so a lot could change over the next few weeks. They currently lead the Patriots by half a game but both teams still need to play each other twice, while Bill Belichick’s side are looking formidable just now so it’s not going to be a shock for the ages if they somehow find a way to take the title back.

The Bills are an excellent team on both sides of the ball and they may even get stronger down the stretch if they can avoid injuries, but it can’t be forgotten that they were completely shut down by the Jaguars a couple of weeks ago, so that does make me very nervous about taking them as favorites.

They are certainly contenders and probably expect to return to the AFC Championship game as a bare minimum, but the Vegas Odds are too short to consider them as the value pick just now.

I’ve paired these two teams together because there are some similarities, but also they play each other in Week 11 so it’s only natural that the loser in that matchup is going to see their odds drift.

KC have really struggled so far this year but there were signs that the offense was back to normal against Vegas last week, while Dallas also bounced back from a difficult game to smash Atlanta 43-3.

Both teams have explosive offenses that can put up points at any moment, while the defenses may not shut anyone down, but they can make plays at the vital moments and force turnovers so there’s a lot to like about both teams as contenders.

Dallas are going to win their division while the Chiefs are only given a 52% chance of that just now so Andy Reid’s men may have a tougher road game in the Wild Card round. Momentum could play a huge part for both teams, but it’s hard to say either is better value than Green Bay just now.

Get ready for a few weeks of the team building vs player collecting debate as the Rams look to bounce back from ugly defeats to the Titans and 49ers.

It’s clear that the Rams are going all-in on a Super Bowl this year after the trade to bring in Von Miller left them with minimal Draft capital next year, while the addition of OBJ was meant to take this offense to the next level. The problem is that Robert Woods was such a vital part of this offense before his season was ended, so Beckham now looks like a replacement for him rather than added firepower at this point.

Matt Stafford doesn’t have a history of going deep into the playoffs and some of his decision-making is worrying at this stage of the year, while the defense also struggled to stop a struggling 49ers offense so there are questions marks everywhere just now.

Sean McVay is a great coach but the Rams have just a 17% chance of winning the division and that means tough road games in the postseason, while performances will need to improve for them to be considered as a value choice just now.

There’s nothing new to be said about Tom Brady at this point in his career, but he does have an excellent history of putting things together in the final weeks of the regular season before playing his best football in January.

The problem with the Bucs now is that they have produced back-to-back defeats against the Saints and the WFT, while it’s also starting to look like the offense can be contained if Rob Gronkowski isn’t available – it’s hopeful that he’ll be back soon, but injuries are always a concern.

They should win the division as the Saints don’t have a QB that they can trust and Carolina are too inconsistent, while we haven’t seen any team defend a Super Bowl crown since 2005.

Of course, it was Brady’s Patriots who achieved that so they can’t be written off, but Bruce Arians called his team “dumb” this week, and history isn’t on their side either.

The Cardinals are an interesting team to watch, but there are a couple of things that don’t go in their favor just now. Every year we see a team start out hot before a defeat rocks them and they lose all momentum, while it also happened to them last year as they started out 5-2 before slumping to an 8-8 finish.

The defeat against the Packers was worrying, but it also looks like Kyler Murray was playing through an injury and his absence led to another defeat in Week 10, while DeAndre Hopkins is also a big miss just now so their big players coming back will help them.

The Cards have some huge games left in their schedule – The Rams, Cowboys, and Seahawks x2 will give them a real challenge. If they can come through those games with a few more wins then their status as one of the favorites will be secure, but they are trending in the wrong direction just now and I’d want to see that corrected before backing them.

There are some interesting outsiders who have obvious flaws, but you also get the feeling that the Patriots, Ravens, and Chargers can win against anyone if they play well, but they also have too many question marks just now to consider them as true favorites.

Lamar Jackson is having another great season and if he plays well then anything is possible, but they were recently shut down by the Dolphins and a similar defeat to the Bengals earlier in the year demonstrates how badly things can go.

The Chargers have lost some close games recently and also seem to be trending in the wrong direction, but if they can finish the year strongly then they could be interesting at +2500.

The most notable outsider has to be the Patriots at +2000 due to their recent run of form, while the defense is coming together and Mac Jones bounced back in the demolition of the Browns so this team has something about them. Their 4% chance of success feels right just now, but if they could find a way to beat the Titans and also take the division back from Buffalo then they would have to be taken seriously.

From the value point of view, it’s hard to look past the Packers just now because they’re given such a good chance of winning while also being ranked as the 7th favorite with Vegas means there’s a good return to be had at +1000.