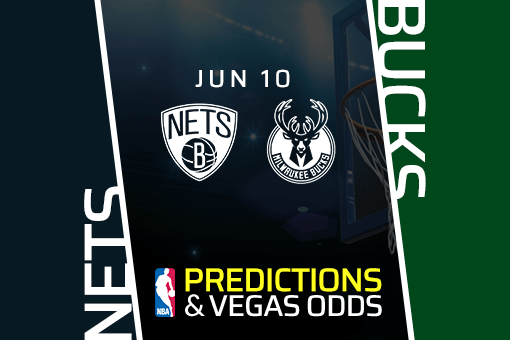 The Milwaukee Bucks come home at the Fiserv Forum to take on the Brooklyn Nets. The Bucks, led by two-time MVP Giannis Antetokounmpo, will try to dig a 0-2 hole over the formidable Brooklyn Nets squad, led by Kevin Durant and Kyrie Irving.

The Nets scored 122.4 points throughout the playoffs. But not just that, because they shoot 49.6% from the field, which is an astonishing efficiency. The main reason for that is Kevin Durant, who seems unstoppable since the start of the postseason.

KD drops 32 points per match, 55% FG, and 50% for three, with 7.3 boards and two blocks. Not to mention, the Nets forward has 91.1% from the foul line. Yes, we agree that other players, especially James Harden and Kyrie Irving, contribute a lot, but Durant is the man here. The former MVP is the pivotal force on the offensive side, and so far, he’s been providing the difference in all the key situations.

Many were wondering would the Nets be the same without James Harden. Well, the answer was given instantly. Demolishing one of the biggest rivals for the title washed away all those doubts, suggesting that Beard’s absence won’t be too big of an issue for Steve Nash.

The Milwaukee Bucks have been one of the best teams in the league throughout the regular part of the season. That was especially obvious in the second part of the campaign, once they caught the rhythm and started posting wins in long stretches.

There are two main reasons why they play badly against Brooklyn. Three-point shooting is the first one. Milwaukee is 14-for-57 from downtown in the past two games, which is the least to say, terrible. On the other side, the Nets hit 36 threes in total, and you can see why Giannis and the boys lose matches easily.

Khris Middleton is the second reason. The No.2 in the Bucks is below every possible level since the series started. He scored 30 buckets combined, with the shooting 13-for-43. Even though Giannis is a bigger star and a better player, without Middleton in the equation, the Greek Freak’s influence on the court diminishes.

Nets vs Bucks Head to Head

Game 1 ended 115-107 for the Nets, who allowed Milwaukee to cut the deficit to a bearable distance in the end. Game 2 saw Brooklyn humiliating the opponents, 125-86. It was by far one of Milwaukee’s worst performances in the previous two or three years.

Nets vs Bucks Prediction and Pick

This is a bold prediction, but we are backing up the Nets to win even though they stand as underdogs. From what we had a chance to see in the opening two games, Nash’s side shouldn’t have trouble beating the Bucks. Now, for those who have some doubts, try with the Nets defending the spread, +3.5 points. It should be a solid reassurance.