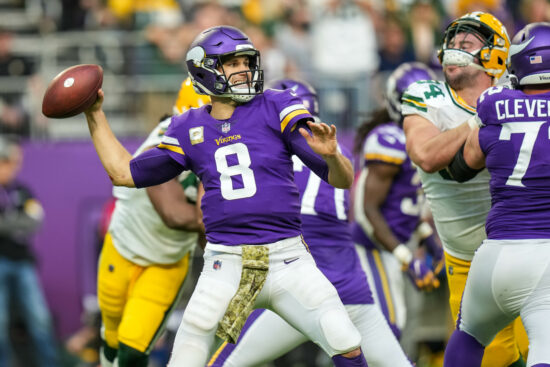 The 49ers and the Vikings clash in what might be a decisive game for the NFC wild-card race. These two rivals are leveled in the standings, which only increases the value of the victory.

So who will it be in the end, Jimmy Garoppolo or Kirk Cousins, the NFC West or the NFC North?

We weren’t that surprised to see the Vikes beating the Packers on Sunday. Why? Well, if you noticed, Mike Zimmer’s crew lost all of its games with a very tight margin, and in all of them, they had a chance to win. Now, that is problematic when you have Kirk Cousins, who, even though posts superb numbers, isn’t a clutch player.

Cousins has 21 touchdown passes and only two picks, but he constantly fails to deliver when needed the most. Don’t get us wrong, he is a solid player, but with all the playmakers at his disposal, Captain Kirk should be an NFL MVP contender.

Justin Jefferson has 944 receiving yards, and six touchdowns, already becoming an All-Pro caliber. With him, the Vikings have a very bright future. Dalvin Cook reached 734 yards on the ground in eight games, while Adam Thielen caught 624 receiving yards for 8 touchdowns.

Many forgot that the 49ers played in the Super Bowl two years ago and that this team has a lot of potentials. What creates trouble for Kyle Shanahan are endless injuries. Each time we look at san Francisco’s injury list, we see at least one big name.

After trashing the Super Bowl favorites, the LA Rams, 31-10, the 49ers kept the momentum going vs. Jaguars, 30-10. Even though some might think that the Jags are a piece of cake, that isn’t true in the recent several weeks.

Jimmy G and the boys didn’t underestimate the rivals, and in the end, the 49ers QB had two TD passes and 176 passing yards. The rushers were unstoppable with 171 yards on the ground, Deebo Samuel having 79 with a TD.

The key here is in Minnesota’s defense. If they stop Samuel, Vikes’ chances are solid, but on the other hand, if they don’t, the 49ers will win for the third straight time. At this moment, we are leaning towards the second option because of Samuel’s current form. Yes, the guests too have unreal offensive weapons, but the home-field advantage, Samuel, and Jimmy G’s rational performances over the past few rounds force us to back up the 49ers.