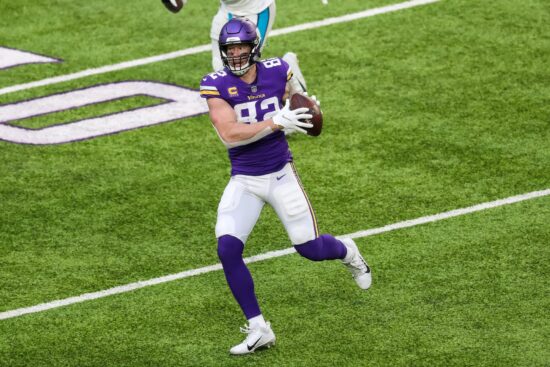 The Vikings fans are probably the most frustrating unit in the NFL community. Their favorites are constantly going back and forth, putting some excellent games which are always followed by unexpected and mediocre performance.

Meanwhile, there are no realistic expectations in Detroit, and it’s hard to see where a win is going to come from.

Vikes Frozen In the Worst Moment

After beating the Packers a week earlier, and posting a big victory on the road over the Chargers week before that, the Vikes suddenly came back into the NFC playoff race, having a massive chance to take a colossal step forward with a win over the direct rivals, the San Francisco 49ers.

However, they lost 34-26 in Bay Area, slipping back below the .500 mark and showing that they really are one of the most unpredictable teams in the league.

Their main problem throughout the entire campaign – defending the run game – emerged again to the surface, as 49ers posted 208 rushing yards and three scores o the ground. On the other hand, Dalvin Cook had only 10 carries for 39 yards, while Kirk Cousins ended the game with a mediocre 238 passing yards, two TD tosses, and one pick.

Missed Chance for the First Win

Or it really wasn’t. Many say the Lions are deliberately tanking the season to get the top pick at the upcoming draft. Yet, we don’t see any game-changers in this class, meaning that their decision could be wrong as most of them in the past decade and more.

Detroit was up until the last seconds, once Cairo Santos scored a walk-off FG winner, bringing the Bears a 16-14 victory. Some might say it’s pretty tragic, but to be honest, we won’t be surprised if the Lions end the season without a single triumph.

Jared Goff had a solid game for this year’s standards with 171 passing yards and two TDs without a pick, but he did lose a fumble. So there you have it, he simply has to commit one turnover per game, even when all the other areas of this performance are OK.

Head to Head – Minnesota Won the First Matchup of the Season

The Vikes lead the NFC North series 79-39-2, and they also defeated the Lions in their first game of the year. It was a close call for the hosts in that one, 19-17. It was the eighth straight victory of the franchise from Minneapolis.

The Vikes are the absolute favorites here, and we won’t waste too much of your time, but we agree with the bookmakers. They need to win, despite all the inconsistencies and surprising results. The spread for Vikings is currently -7, and I think they will cover it despite their inconsistencies.