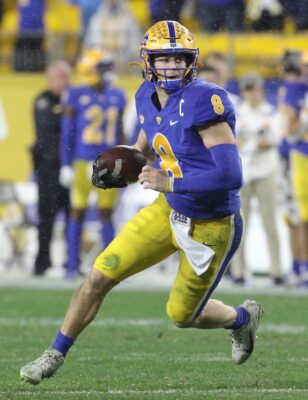 The ACC Coastal division is on the line Saturday afternoon when the Virginia Cavaliers visit the #21 Pitt Panthers at Heinz Field. The Panthers control their own destiny and can clinch a 2nd ever trip to the conference championship game with an ‘in’ over Virginia. UVA can get in the driver’s seat with a win over Pitt, and can make their 2nd trip to the title game with a win over Virginia Tech next week. A huge game for both teams.

Virginia Set to Air It Out

Saturday’s matchup features two of the best QBs in the ACC if not the country. Virginia’s Brennan Armstrong is 3rd in the country with 3,567 yards passing to go along with 27TD to 8 INT. Armstrong has 330+ yards passing in 9 of 10 games this season, but Pittsburgh was able to hold North Carolina QB Sam Howell to a manageable 296 yards passing with 2 TD and 1 INT in last week’s 30-23 win over the Tar Heels.

Saturday’s game feels like it could turn into a shootout, and oddsmakers agree by setting the betting total at 66. The Panthers kept Howell in check, but also rank just 8th in the ACC allowing 242.9 yards/game. It’s unlikely that either team stop the pass in this game, as Virginia is tops in the conference with 380.5 yards/game passing, but Pitt is right behind them at 373.1. Those are the 2nd and 5th best passing offenses in the entire FBS.

It’s not even known if Armstrong will be able to play this game however, considering he missed last week’s 28-3 loss to Notre Dame with a rib injury. The injury happened October 30th in a 66-49 loss to BYU on October 30th and UVA has also had their bye over that span so it’s been roughly 3 weeks since Armstrong has taken the field. Backup Jay Woolfolk was 18/33 for 196 yards with 2 INT vs. the Fighting Irish.

Pittsburgh coach Pat Narduzzi has said this week that his team is preparing as if Armstrong will be starting at QB for Virginia. That might not be as good for the Panthers, but it’s beneficial to the fans as we get to see the heralded Armstrong vs. Kenny Pickett quarterback matchup.

Pickett has been amazing this season, most recently throwing for 346 yards with 3 TD (1 INT) in the OT win over North Carolina. Pickett had thrown for 519 and 416 yards the two games before that, and he now has 32TDs which are 4th most in the FBS. Pickett also has just 4 INTs in 385 attempts this season.

It should be another huge afternoon for Pickett considering that BYU QB Jaren Hall threw for 349 yards and 3 TDs vs. the UVA defense in week 9. Pitt features a balanced rushing attack with three RBS having 330+ yards and 4+ TDs on the year, but that part of the Panthers offense could also be huge this week considering BYU also ran the ball for 385 yards in their win over the Cavaliers. Notre Dame also had 249 yards rushing vs. the UVA defense last week.

Pitt is a lofty -14.5 favorite in this matchup and the atmosphere should be electric as the Panthers try to clinch the division in front of their home crowd. Pittsburgh has covered the number in six of their last seven, but if Armstrong plays UVA has the offense to keep this one within two TDs.