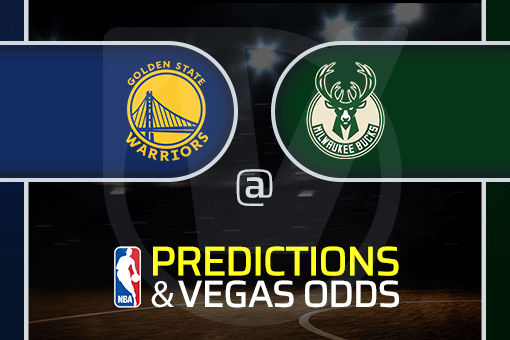 The most interesting matchup of the night is in Winsconsin, where the reigning NBA champions, the Milwaukee Bucks, host the Golden State Warriors.

This will be a battle between the two big title contenders and between two NBA MVP candidates, Steph Curry and Giannis Antetokounmpo.

One of the most potent teams in the NBA history in terms of scoring hasn’t been shooting well in the past four games. That is why they didn’t reach a 100-point mark on three occasions during that period, posting the same number of defeats.

Though, the schedule wasn’t favoring the Warriors, who lost in Dallas, New Orleans, and lastly in Memphis, against the Grizzlies, 116-108. GSW had only 35 field-goal hits in Tennessee and 42.7% shooting.

Steph Curry scored 27 points, posting a triple-double as well with 10 boards and assists, but having mediocre percentages, shooting 8-for-21 from the field. Klay was 5-for-13 for 14 points, while Gary Payton II added 13 and Jordan Poole 12, both off the bench.

The champions lost four in the past five games, including back-to-back defeats in Charlotte against the Hornets. The first event ended 114-106 for the franchise from North Carolina, who once again got out victorious last night, 103-99.

Not having Jrue Holiday was felt pretty badly in Milwaukee’s game. Most of their trouble in defense came from the backcourt positions, and on the other side, his points in attack eventually made the difference. Holiday’s absence was the key to low efficiency.

Khris Middleton was solid in the second game vs Charlotte, with 27 points and 11 assists, 10-for-19, while Giannis had one point fewer and 13 rebounds, eight assists, 10-for-18 FG. Jordan Nwora had 18 points and the veteran Wesley Matthews 13, and that was pretty much it from the Bucks’ offense. We also want to mention that the entire bench contributed 10 points.

This is the first contest between these two powerhouses in the current campaign. During the previous one, we saw the Bucks winning at home, 133-99, and the Warriors in San Francisco, 122-121.

Both teams are in problematic form and have a few important players out. They struggle to score and deliver on the offensive side, which is why we were surprised after seeing the limit for the total points set at 223 points. In our opinion, this is way too high for these teams at this particular moment, therefore go with under. The Warriors are the no.1 defensive team in the league, and on the other side, Giannis and the boys are also harsh in preventing the rivals from scoring.