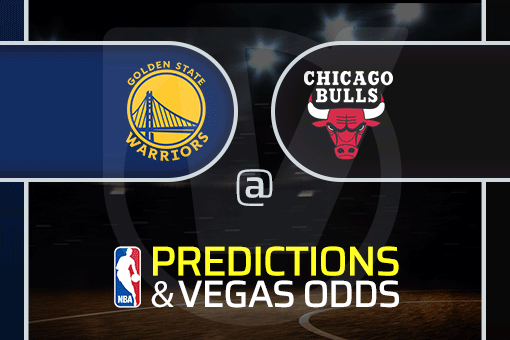 The Golden State Warriors and the Chicago Bulls will provide us with a very interesting matchup at the United Center. For some, this is a potential NBA final. For others, nothing more than a contest between two very attractive teams who play well but are not title contenders.

Golden State Suffered a major blow in Milwaukee to the reigning NBA champions, the Bucks. That game finished 118-99 in favor of the hosts, who were leading up to 39 points at one moment.

This terrible loss needs to be archived as soon as possible, because the Warriors have another big challenge coming up. They are about to face the top team of the East, the Bulls, who are playing in superb shape, with two NBA MVP candidates. Of course, both are behind Steph Curry, who leads the race with a comfortable lead. At least for now.

One more thing won’t be favoring the Warriors. Klay Thompson is resting tonight, along with Draymond Green, which leaves GSW’s small forward position heavily weakened on both sides. And that is where the Bulls have their best players, DeRozan and LaVine.

How long since we saw the Bulls on top of the East? We aren’t sure, to be honest, but something tells us that the last time that happened, D-Rose was the MVP. As said, the Bulls have two players in the mix for that award, but the more important thing is that they play well as a team and have certain chances to make a big noise in the playoffs.

After having an excellent stretch of performances, the Bulls dropped two of the last three events. In between losing to the Mavs and the Nets, they beat the Pistons in the postponed game due to COVID-19 chaos. That did disrupt their plans and schedule, but that’s how things work in the league these days.

The Nets rolled over the Bulls at United Center, 138-112. Probably a bit tired from the game the night before, they couldn’t match Brooklyn’s offensive output, and even though Chicago had solid percentages, their rivals had even better. LaVine scored 22 points, DD 19, and Vucevic 14.

The first clash in San Francisco saw hosts’ confident win, 119-93. Though, we need to say that the Bulls played without Nikola Vucevic and a few other solid players.

This is a perfect chance for the Bulls to get even with the Warriors. They have home-court advantage, a rival that comes to play on second of its back-to-back nights, and all the favorable matchups. GSW doesn’t have the necessary balance on the SF/SG position to restrain the Bulls’ fantastic duo.