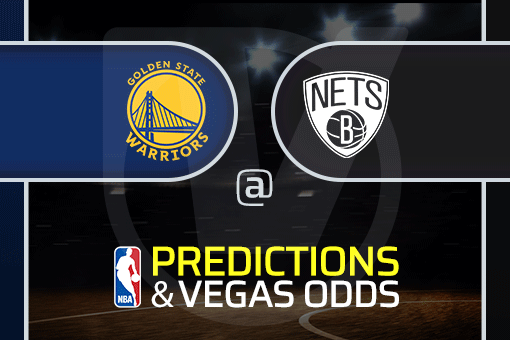 Tuesday’s program in the NBA promises a lot of action. The fans will have three very interesting matchups on the table, with the first one taking place in Brooklyn, where the Warriors take on the Nets, in the clash of two arguably the biggest favorites for the NBA title.

So far this year, whoever appeared on the ESPN show hosted by the Manning brothers, lost the very next game. Last night, we saw Draymond Green there, and the Dub Nation fans wonder if this applies only to pro football players or all the athletes.

The Warriors recently broke their winning streak with a loss in Charlotte against the Hornets, 106-102, unsuccessfully starting the tour through the East. Tonight’s clash will be the test for the majority of their players, apart from Steph Curry.

The two-time NBA MVP is the biggest favorite to win this year’s award, and so far, he has been playing incredibly well. Curry is arguably the biggest reason why his team tops the standings. Though, we need to mention Jordan Poole’s improvement, as the shooting guard delivers 17.2 points per game, with a 43.4% shooting percentage.

After six consecutive road games, the Nets are coming back home. They’ve recorded five wins during that span, and even though they didn’t have some utterly tough opponents on the other side of the floor, all these victories have boosted the morale of Steve Nash’s crew.

Some of the more important role players like Joe Harris and Paul Millsap have been ruled out due to injuries, but the Nets should be able to cover those absences. James Harden is playing better and better, which is the reason for Brooklyn’s successes.

The Beard averaged 12 assists in the past three games, and his shooting percentages have been better than earlier. So far this year, Harden has dropped 19.5 points with 9.3 assists and 7.6 boards.

The Nets were better in both clashes last year. The first one in Brooklyn ended 125-99, and the second at Chase Center 134-117, both in Nets’ favor.

The line for the total number of points is 220, and knowing that this is bound to be a run-and-gun matchup, we can’t think of any better prediction than Over. Why? The Nets’ offensive rhythm is solid, with three consecutive matches with 120+ points. Yes, the rivals weren’t playoff contenders, but still, the confidence is high. On the other side, Steve Kerr’s side is in a similar situation. Up until the game against the Hornets, they were superb on the offensive side of the ball. Therefore, Over 220 points is our projection here.

And about the “Manning Curse,” leave that one be. We strongly believe that some strange powers led Eli to two Super Bowls, and the odds aren’t in favor of it being broken here either.