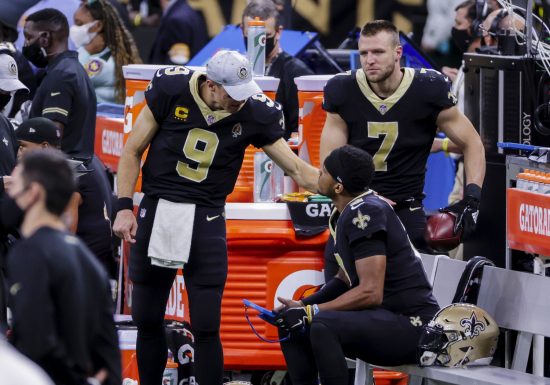 The Falcons have turned a corner following an 0-5 start, and will look for a third straight win when they travel to New Orleans.

Atlanta (3-6) is winners of three of their last four matchups, with the only loss being a one-point, last second loss to the Lions. They’ve been able to clean up some of the mistakes made early in the year, and seemingly have righted the ship over the last month of the season.

They’re still looking up at New Orleans (7-2) in the NFC South, though, as the Saints have rolled through the first half of the year. After a precarious 1-2 start, Drew Brees and Co. have reeled off six straight wins, and lead the Tampa Bay Bucs by a ½ game in the division.

Can the Falcons end the winning streak or will the Saints continue their run to a division title? Let’s break it down.

Drew Brees was injured in last weekend’s win over San Francisco, and it’s looking likely that he’ll miss an extended period of time. In his absence, New Orleans relied on Jameis Winston and Taysom Hill to run the quarterback position.

Winston played well, completing six of ten passes for 63 yards, but he wasn’t asked to do a whole lot with the Saints holding a lead for the entire second half. He’ll be asked to do more this week, and Atlanta will try to take advantage.

The defense will likely focus on the run game, trying to shut down Latavius Murray and Alvin Kamara, forcing Winston to drop back and pass. Atlanta hasn’t played well on defense but they have been able stop the run (99.7 yd/gm).

On offense, the Falcons possess the NFL’s second leading passing attack, and they’re scoring 27 points a game. They’ll have their work cut out for them when facing the Saints’ fourth-ranked defense. They’ve been particularly stout against the run, but may be vulnerable in the secondary.

New Orleans will rely on its skill players to help out Jameis Winston under center. Alvin Kamara stepped up last weekend, scoring three touchdowns in the Saints’ win. Receivers Michael Thomas, Emmanuel Sanders, and Jared Cook will also be heavily called upon.

If the Saints can gain an early lead, they’ll likely lean on their defense for the majority of the game. The group ranks fourth in total defense, and second in run defense. They’ve also turned over their opposition 13 times, and have taken down opposing quarterbacks 24 times. They’ll hope to succeed in both of those areas when battling a potent Atlanta passing attack.

The Saints have won four of the last five in the series, with all but one game being decided by two scores or more. Those wins, of course, came with Drew Brees under center. The Saints won’t have that luxury on Sunday.

Atlanta has been playing great over the last few weeks, and could be in line for an upset. Look for the game to remain close well into the second half.

The Saints’ defense is one of the best units in the league. Atlanta should be able to get their share of yards with Matt Ryan leading the offense, but the Saints may be able force a few mistakes, too. With New Orleans breaking in a new quarterback, we’re expecting a low scoring affair. Take the under.