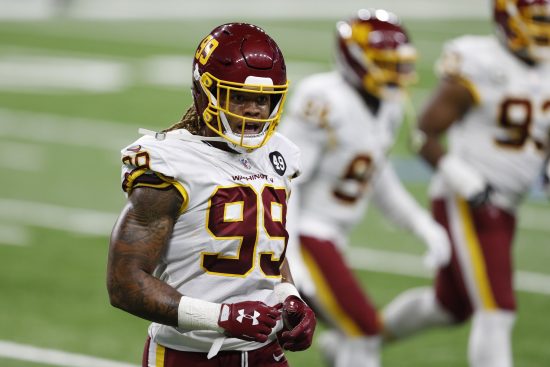 The Bengals and Washington Football Team meet, with both looking to end their losing streaks.

Cincinnati (2-6-1) travels to the nation’s capital on Sunday, looking to bounce back from a 36-10 loss versus Pittsburgh. The Bengals are losers of four of their last five matchups, but have shown some promise under rookie signal caller Joe Burrow.

Washington (2-7) has also dropped four of their last five, including three heartbreakers in the last month. That culminated with a last second loss to Detroit last week, where they battled back from a 24-3 second half deficit.

Which team gets off the schneid this Sunday?

Cincinnati had been rolling on offense prior to their matchup with the Steelers, averaging 30.7 points a game over their previous three contests. Unfortunately, that came to a screeching halt in Pittsburgh, as the Bengals were held to just 10 points.

The offense will look to bounce back this weekend against a Washington group that ranks seventh in total defense.

That offense is led by Joe Burrow, who sits at ninth in the NFL in both passing yardage and touchdowns. His favorite target has been Tyler Boyd, who’s caught 60 passes for 625 yards and three scores. Tee Higgins and AJ Green have also reaped the benefits of Burrow’s production.

On defense, the group has been bad, allowing more than 400 yards and 27 points a contest. They’ll look to lock down a bad Washington offense, that ranks 28th in the league.

Alex Smith made his second start of the year last week, and nearly led Washington to a come-from-behind win over the Lions. After going down 24-3, Washington battled back to tie the game at 27-27 with less than 20 seconds left in regulation. Unfortunately, the defense allowed Detroit to get in field goal position, and the Lions pulled out the 30-27 win.

Smith, though, has been impressive over his last two games, eclipsing 300 yards in both outings. In two games and change, the veteran passer has thrown for 752 yards. Receiver Terry McLaurin has been the team’s best pass catcher, regardless of who’s under center, hauling in 57 passes for 787 yards.

Washington will need its run game, currently ranked 30th in the NFL, to step up and provide some help for Alex Smith. If not, the offense could become one-dimensional.

Cincinnati is 3-0-1 in their last four meetings with Washington, though the two haven’t played since 2016. Washington has lost close game after close game, while Cincinnati has at least shown the ability to compete with the NFL’s best. Washington is favored, but we’re expecting the Bengals to pull this one out.

The Bengals have scored 25.5 points a game over their last four matchups, while Washington has put up 22.8 points a game in that same time frame. Both defenses are flat out bad, while both quarterbacks have the ability to post big numbers. Expect the over to hit.