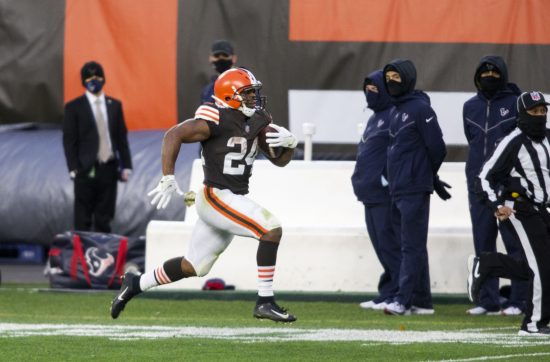 Cleveland Browns have a perfect opportunity to beat the pale Philadelphia Eagles and continue their playoff chase.

The Browns are playing a hot and cold game, with subsequent wins and losses in the last five rounds. But that is Baker Mayfield’s team, and we kind of got used to it already. They now have a chance to post back-to-back wins as lame Philadelphia Eagles visit Ohio. The situation in their locker room is far from perfect, with Carson Wentz’s status being questioned all the time. One of the highest-paid players in the league is playing under every decent level.

Mayfield and the crew struggled over the past two home games, scoring 16 points combined. That is humiliating. The only lucky thing is that they haven’t lost against the Texans, which would have been a major setback in their playoff hunt.

Once again, Nick Chubb saved the day, with Cleveland’s only touchdown in the game and 126 rushing yards. Browns’ RB averages 6.1 yards per carrying, which is fantastic, and so far, he added five rushing TDs as well with just one fumble. Apart from Chubb, Cleveland has Kareem Hunt, who recorded 633 yards at the moment, and the two are making one of the most powerful RB duos in the league.

Interestingly, with 6 wins and 3 losses, Kevin Stefanski’s side has a negative point differential, scoring 24 points while allowing 27.1.

Is Hurts Going to Start?

With 12 intercepted passes, Carson Wentz is the leader in this negative category. Also, the Eagles’ starting QB has five fumbles so far and was sacked 35 times. The majority of losses came because of his subpar performances.

The media in Philly are already debating on his future, suggesting that it might be time for the 53rd pick from this year’s NFL Draft, Jalen Hurts, to replace Wentz. So far, Hurts has been used mostly as a running back, posting more rushes than passing attempts.

Eagles’ defensive team isn’t particularly good in stopping the rival’s rushing game, and allows 133 yards per game, meaning that the Browns might exploit this situation heavily.

These two sides rarely meet in recent years. The last clash was in 2016, when the Eagles defeated Cleveland 29-10 in Philly. By the way, the team from Pennsylvania has five consecutive victories.

Even though the Browns aren’t especially convincing nor consistent lately, it appears that they have much more quality than the Eagles, whose chemistry is about to be ruined. All the negative talks about their future and Wentz, etc, are negatively affecting the team.

They are coming in this match as -3.5 underdogs, which is, in our opinion, an easy task for the hosts. Chubb-Hunt duo will be a massive problem for the Eagles, and if Mayfield plays a bit better than in the past two matches (which is pretty realistic), the guests have nothing to hope for.