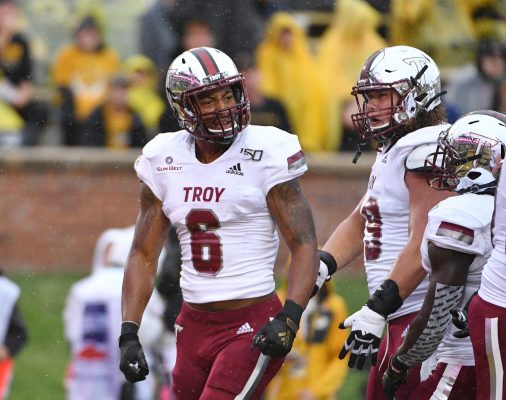 With a huge upset win against a power five opponent like Kansas to open up the season, the Coastal Carolina Chanticleers have not looked back since. The team from South Carolina gained notoriety from week one with this upset not only because nobody expected them to win but also because they were among the few Division-I conferences playing at the time.

A Team on a Mission

The Chanticleers rode this momentum by winning every single game through week 7 of the college football season until they were finally given a top 25 ranking for the first time in school history after beating #21 Louisiana Lafayette on the road.

“It is something that’s pretty special for our university and our program being the first time ever,” Head Coach Jamey Chadwell said. “It’s a big deal, but also we’re realistic knowing if we slip up one time we’ll probably never see it again. So I told our guys if you want to stay there and continue to do something for this program, we have to continue to keep winning.”

And that is exactly what Coastal Carolina has done. Through 10 weeks of the season the Chanticleers have yet to lose with Quarterback Grayson McCall throwing for over 1300 yards and 16 touchdowns to only 1 interception. This has also been combined with a stout defense who has only given up an average of 16 points a game.

Their opponent the Troy Trojans however have had a different kind of season. They also opened up with a statement road win against the Middle Tennessee State Blue Raiders but then faced a buzz saw opponent in BYU the next week and had a game postponed due to the coronavirus after that. From there on out they managed some close wins over opponents like Eastern Kentucky but also close losses against Georgia State and Georgia Southern.

When looking at these teams, it is best to compare common opponents they’ve played so far in Georgia State, Georgia Southern and Arkansas State. Both teams blew Arkansas State out of the water by at least 21 points. However, Coastal won a close game to Georgia Southern by pulling away late to win by two touchdowns and Troy lost to the same team by one touchdown.

While these two games for both teams against a common opponent like Georgia Southern looked like they could have gone either way, the real difference between them shows when looking at how they each played Georgia State. Coastal shutout and blew them out 51-0 on the road no less meanwhile Troy lost 36-34 at home to a team that managed only 106 yards against the Chanticleers!

With this being said I still think Troy’s offense will keep them in the game against Coastal, but their defense will be slowly worn down later in the game. More importantly, The Chanticleers are playing like a team possessed and on a mission to at least end up in a New Year’s Six Bowl this year. For sure they have had some close games, but I see no reason to doubt them in this one.