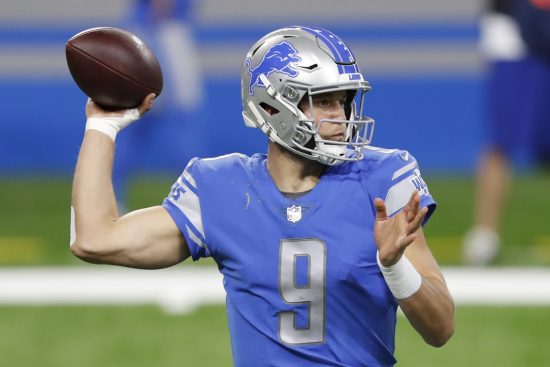 Detroit Lions are hoping to squeeze into the playoff race, and a win against the Carolina Panthers this Sunday would be very helpful.

The Panthers shined for three weeks following a 0-2 start and after that got back to being mediocre. Right now, they have five losses in a row, and an injured Teddy Bridgwater who isn’t sure for this event. On the other side, the Lions are showing signs of quality, but they are still under the radar for most of the NFL community, and that suits them well, we might say.

For a brief moment, once Carolina beat the Chargers, Cardinals, and the Falcons, we believed that they could be a nice surprise this year. But that turned out to be just a temporary spark until the rivals got used to playing against them without Christian McCaffrey. All the teams made their gameplans focusing on CMC, and needed time to adjust to the fact that he isn’t on the field.

Teddy Bridgewater won’t be on the field as well this Sunday, various sources report. Even though he is cleared to practice, Bridgewater’s appearance in the lineup isn’t confirmed. However, we believe that it is still early for such claims, and we advise you to keep an eye on his status.

Without Teddy B, RB Mike Davis would have to step up and endure a huge load of snaps. He was solid over the first few weeks since McCaffrey’s injury, but Davis’s productivity fell as time went by. Against the Buccaneers, he had just 32 yards on the ground in seven rushes. Though, he did pick up an injury back then, but should be available for Detroit.

Lions Quietly Waiting for Their Chance

Virtually nobody saw the Lions in the playoff race, but here they are, waiting their chance in the dark, far away from the focus of the media. With a win here, Matthew Stafford and the guys would have a nice opportunity to chase that seventh spot in the conference.

Stafford is having a solid season, with 17 touchdown passes and seven interceptions, throwing for 2403 yards. However, the Lions’ QB has a partially torn thumb ligament, which is a massive problem because it is on his throwing hand.

That indicates that the ever-lasting star running back Adrian Peterson and the rookie D’Andre Swift should receive snaps more often. Swift carries the football 4.7 yards per rush, while Peterson has significantly lower productivity, 3.8 p/c.

The predicted limit for the total number of points is 47.5. Keeping in mind that both sides have vulnerable QBs, who are dealing with more or less nasty injuries, we aren’t expecting high efficiency. As mentioned in the text, this will probably be a match with the running backs in the main roles. You all know that such a scenario often provides a lower number of points. So, under is the logical choice here.