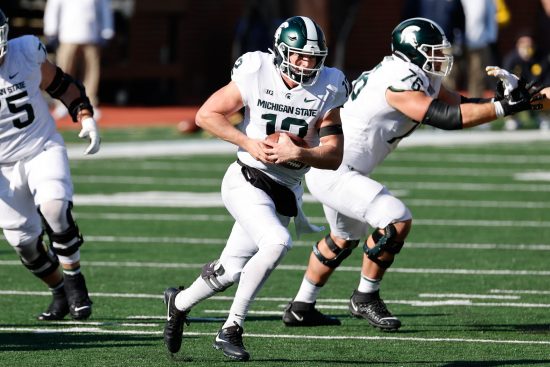 The Indiana Hoosiers took a big steps towards legitimacy for their 3-0 start and #10 ranking with a dominant 38-21 win at home against Michigan last week. IU faces another team from the Great Lakes State with a bevy of problems when they visit the Michigan State Spartans, who lost by 42 points at Iowa last week. Indiana is a -7.5 road favorite on Saturday afternoon.

Hoosiers Seem to Be For Real

People are finally starting to turn their heads – for the most part – when it comes to the Hoosier’s 3-0 start. When IU beat 36-35 in the opener, it was because Penn State was sluggish to start the year. Indiana beat Rutgers 37-21 in game two, but they were supposed to as -11 point favorites. Even last week’s 17 point win over the Wolverines isn’t getting as much respect as it should because people just think Michigan is horrible this year.

Indiana can only play who is put in front of them, but how impressive is a win over a Michigan State team that lost by six TDs to the Hawkeyes last week? The Hoosiers like having that chip on their shoulder though, and their offense has been spectacular with at least 36 points scored in all three wins.

Michael Penix, Jr. has orchestrated this Indiana offense that is growing in confidence by the week. Penix had 342 yards passing vs. the Wolverines, and has 6 TD to 0 INT the last two weeks. Penix usually doesn’t get much help from his rushing game (113th in the nation), but Stevie Scott had 97 yards and 2 scores vs. Michigan. The Spartans gave up 225 yards on the ground last week against Iowa.

Michigan State in a Rut

With Indiana’s dominant victory over Michigan last week, it’s kind of putting the Spartans signature victory of the season in question. Michigan State’s only win of the year came 27-24 in week 9 against the Wolverines in Ann Arbor.

Michigan State fell down 35-0 at the half to Iowa last week, due largely in part to another big turnover week from Rocky Lombardi who threw 3 INTs. Lombardi threw 2 INTs and had one of five lost fumbles for Michigan State in their 38-27 loss to Rutgers in the season opener. That was the first conference win for the Scarlet Knights since 2017.

If Michigan State doesn’t turn the ball over they have a chance against Indiana. Lombardi had 323 yards and 3 TDs and the Spartans added 126 yards on the ground in the win over Michigan while allowing 0 sacks and giving up 0 turnovers. Indiana has one of the best secondaries in the Big Ten however, and have forced 7 turnovers in three games.

Michigan State has won three straight in this series, including 40-31 last season also in East Lansing. Indiana is playing very physical right now though, and Michigan State backed away from the punishing play against Iowa last week. Penix, Jr. is starting to work his way into the Heisman race, and he’ll have another big day against the Spartans.