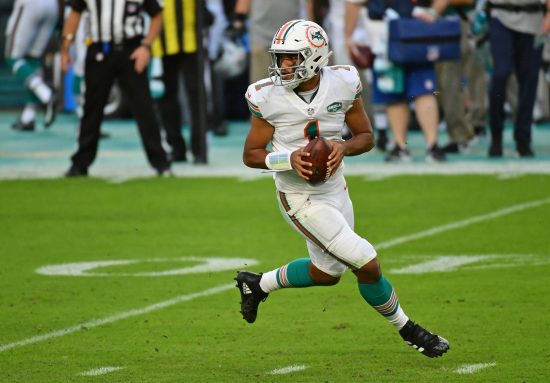 Tua Tagovailoa and his Miami Dolphins are on fire and intend to stay that way against the Broncos in Denver.

We were truly sorry to see Ryan Fitzpatrick being benched, but Brian Flores’ action had all the sense in the world. Tua Tagovailoa showed that he is ready to step in and amaze the league with his talent. Currently, his Dolphins are on a five-game winning streak, while on the other side, the Broncos improved after a terrible start. They are nowhere near the playoff level, but various injuries ruined their start, putting the Broncos in a bad position.

Drew Lock suffered a rib injury against the Raiders, and he didn’t participate in any practices this week. Vic Fangio suggests that his QB recovers very well, but many doubt, as he didn’t have a single throw until Thursday.

Overall, Broncos’ QB had a terrible game against the Raiders, throwing four interceptions and just one TD pass, for 257 yards, adding a fumble on that as well. Another thing was also strange, and that is Phillip Lindsay’s four snaps for the entire game, with the running back recording two yards!? Fangio had some explanations on that, but the fans were not pleased, at all.

Instead of having one of the most dominant running games in the NFL, Denver averages only 106.6 yards per contest in that area. It is truly disappointing with Melvin Gordon and Lindsay on the team.

The fifth pick from this year’s draft currently has five touchdowns over the past three games without being picked. Since becoming a starter, Tagovailoa posted 510 yards, with a passer rating of 104.9. We still haven’t seen him throwing bombs or something like that because it seems that Flores tries to make him comfortable first and then try various ideas.

Miami has been tremendous over the past five rounds, beating the 49ers, Jets, Rams, Cardinals, and Chargers. A pretty solid company, wouldn’t you say.

What could be the problem is that the Dolphins don’t have a No.1 wide receiver. In 10 matches, six different players had team-highs in receiving yards. On the other hand, some see that as a big advantage, because the opponents’ defenses don’t know how to create their game plans.

The Dolphins and the Broncos met in Florida three years ago, with the hosts posting a massive victory, 35-9.

This is the first big test for Tagovailoa when it comes to road matches. The game in Glendale against the Cardinals can’t be compared to the upcoming due to many reasons. No.1 is the environment, as Mile High can have cruel playing conditions, unlike the indoor facility in Arizona. So, it is better to avoid predicting the winner in this clash and focus on the number of points, with the limit set at 45. The previous two games Denver played at home saw around 60 points and Miami’s recent contests were also very efficient; therefore, it would be very unwise not to go for over.