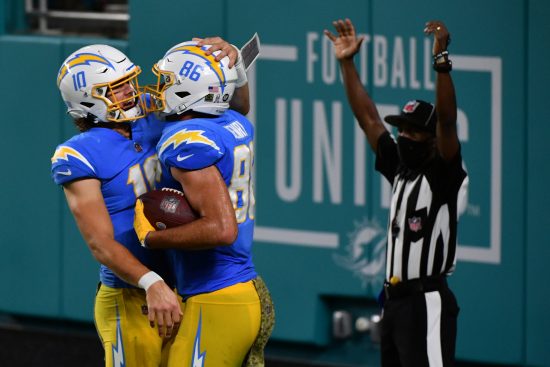 The sorry New York Jets travel to Los Angeles to meet the Chargers.

This is one of few games this season in which the Chargers are listed as favorites. Though, after a tough start and forced premature debut of the rookie Justin Herbert, that was somewhat expected for the team from LA. On the other side, nobody expected to see the Jets without a single win after nine games played. The team from NY is moving towards the top pick at this year’s draft, and the remaining part of this campaign will be focused solely on that.

Chargers Learning How to Win

Just to remind you, this is the team that forced overtime against both the Chiefs and the Saints. Recently, the Chargers lost to Denver 31-30, and had tight losses against Las Vegas and Miami. You can see that they need just a little bit of luck to become a winning side.

Check this data. LA allows 27.2 points per game, and scores 25.1. They generate 414.3 yards during each match, and on the other side, their opponents have 359.6. What are these pieces of information telling us? Easy. Justin Herbert is still learning how to win. This paragraph’s heading is deliberately saying “Chargers” instead of “Herbert,” but from our point of view, the entire team is in his hands, and he is slowly becoming the leader, despite being a rookie.

His stats are very well, for now, 19 TDs, 6 picks and 2333 yards, plus four fumbles. That is ok for a rook, especially if you didn’t even plan on letting him play.

Even when they had a chance to win and make a sensation, the Jets found a way to waste it. They were holding everything in their hands against the Patriots, and if it weren’t for one unprovoked deep pass in the final period, Adam Gase’s side would pick a W against one of their biggest rivals.

That wouldn’t change anything, to be perfectly clear, but at least, the Jets wouldn’t be a 0-16 team. Right now, after the game against the Patriots, that seems pretty inevitable. An opportunity like that one won’t come twice.

Joe Flacco was looking good if it of a consolation for the Jets’ fans. Until the moment when he threw an interception, he had three TDs, reminding everyone how he used to play in his prime.

The spread on the Chargers is -8.5, which is too low. They have a solid defense, which would no doubt stop the rivals from the Big Apple. Meanwhile, Herbert knows how to hurt much better units than the Jets’ defensive team, and he should produce good numbers on Sunday night, as well as the entire hosts’ offensive crew.