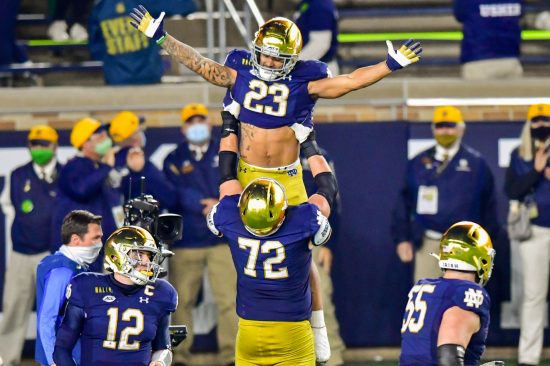 Although the two technically don’t belong to the same conference, the Notre Dame Fighting Irish and the Boston College Eagles remain rivals. The thing is that the two programs are run by the only two Catholic universities that compete in NCAAF.

Unlike some other football rivalries, the Notre Dame at Boston College games are pretty friendly, evident from the fact that the winner of the game is presented with the Frank Leahy Memorial Bowl. The trophy was created by the Notre Dame student government in the 1990s to serve as a “token of goodwill, camaraderie and friendly rivalry.”

Even though the rivalry is friendly, you can be sure that their next game is going to be an exciting one. The Fighting Irish are in a sensational form, while the Eagles are super-hungry for success.

Notre Dame Coming Off a Big Win Over Clemson

Last Saturday’s game between Clemson and Notre Dame was one of the most thrilling games not just of the weekend, but the entire season. After finishing 33-33 after 60 minutes of play, the game saw two overtimes, with the Fighting Irish getting themselves a 47-40 win.

The victory came after running back Kyren Williams scored two touchdowns in the second overtime period. It was the first win for the Fighting Irish against a #1 team since 1993, as well as the first defeat for Clemson after 36 straight wins.

It’s obviously a huge achievement, but the win has made Notre Dame fans rush onto the field after the game, disregarding the COVID-19 social distancing measures. Their celebration drew a lot of negative comments on social media, including a tweet from NBA legend LeBron James.

The Fighting Irish are still in a celebratory mood, but they need to get themselves focused on the next game. They surely got the confidence to win their 14th straight game, especially knowing that the Eagles tend to struggle against them. In fact, the Fighting Irish have won every single Notre Dame vs Boston College game since 2008.

In their most recent duel, the Fighting Irish won by 40-7. The game was played almost a year ago, on November 23, 2019. A lot has changed since, but the key players from both programs are still on the roster.

Ian Book, who passed for 239 yards and three touchdowns in that game, is still the quarterback for the Fighting Irish. And he’s been brilliant this season so far, getting his name in the conversation about the best QBs in Notre Dame’s history.

Knowing all this, it’s clear who is the favorite in the game on Saturday. Considering how inspiring they’ve been, Notre Dame should have no problems covering the 13.5-point spread.