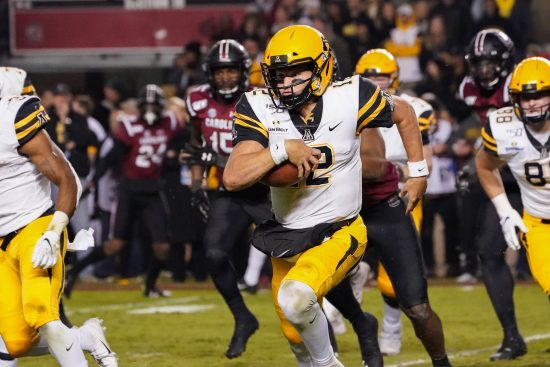 After last week’s game against Troy had been postponed to December 12th, the Chanticleers look to pick up right where they left off against one of their more challenging opponents on the schedule in one-loss Appalachian State.

Toughest Opponent Yet for Coastal? (Yes that Includes Kansas)

After a close 17-7 loss to the undefeated Marshall Thundering Herd in the second week of the season, Appalachian State turned things around at 1-1 and has not looked back; winning their last five by an average margin of 20 points. This is mainly due to the fact that they’ve let their opponents only score over 20 points just once this season! (And it was only 21 points). It is no surprise that Pro Football Focus named App. State DB’s Shemar Jean-Charles and junior Shaun Jolly the top corner duos football in football as this defense is one of the highest rated in forcing incompletions.

And with a dominant defense, you know there is just as a dominant offense to compliment it with Senior Zac Thomas under center. The Mountaineers QB has an outstanding 70 percent completion percentage behind 12 touchdowns and the dual threat has rushed for over 200 yards as well.

The Good and Bad of Chanticleer’s 2 Week Game Draught

As we all know in college football, momentum is everything. Which is why the unstoppable force that has been Coastal Carolina would’ve loved to keep it going against a decently talented Troy team last week, however with the game canceled due to the coronavirus. But the school’s Athletic Director Matt Hogue maintains that the team knew this could’ve happened, “We knew there could be interruptions this season as we work through this environment.”

Furthermore in the absence of a game, Head Coach Jamey Chadwell has now had to deal with rumors the past week of him potentially taking the South Carolina head coaching job after Will Muschamp was fired by the university this week. “I have not [thought about it], and I think anytime you speak on a rumor obviously they’re rumors for a reason because there’s not much truth to them,” Chadwell said.

However there is some good news to come with the time off Coastal has gotten. Redshirt Freshmen sensation Grayson McCall had been nursing a upper body injury that prevented him from playing against Georgia State, yet he still played two weeks ago against Southern Alabama presumably not at 100 percent. The two weeks in between the game to get back to full-go should have McCall ready for this big test against a very tough Mountaineers defense.

Even though this App. State team brings with them a solid defense and a reliable QB, I’m still taking the Chanticleers on this one. You know how I said App State doesn’t allow a lot of points in their games? Well Coastal’s allows even less! More importantly I think the Chanticleers just have more fire power to their offense, which every defense eventually succumbs to. Just look at how Coastal beat the breaks off Georgia State 51-0 but App. State had to come from behind to win in the fourth quarter when they were favored by 18 points.

This game will be close, but Coastal keeps on rolling.