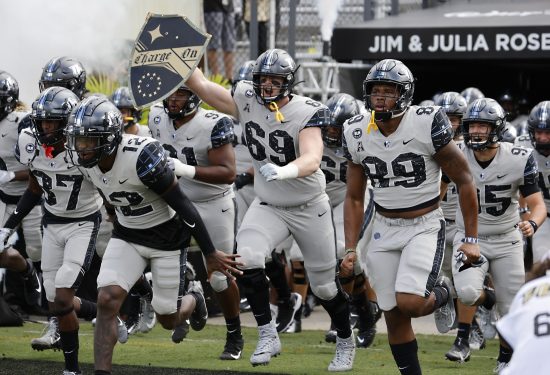 The red hot Cincinnati Bearcats (7-0) try to keep their dream season going on the road in what could be a trip-up game against the Central Florida Knights (5-2). The Bearcats have a dominant running game which tends to travel well, but UCF boasts the nation’s top-ranked passing attack. The Knights are +4.5 home underdogs, and early in the week oddsmakers were still calculating what should be a sky high betting total.

The Bearcats have passed every test they’ve had this season, and usually in remarkable fashion. Cincinnati was a +1 underdog in their week 8 visit to SMU and responded with a dominating 42-13 win. Luke Fickell’s team was favored by just a touchdown a week later against Memphis, and subsequently produced another impressive 49-10 victory.

Cincinnati doesn’t just win, they have been demoralizing opponents which continued in a 55-17 thrashing of East Carolina last week. The win was expected as the Bearcats were nearly 4 TD favorites, but tallying 299 yards rushing and another 354 through the air builds great momentum for the showdown with UCF.

One thing concerning about last week’s win for Cincinnati was that they allowed 206 yards on the ground to an ECU team that is just 1-6 on the season. The big test for the Bearcats defense this week though is going to be on their secondary. UCF is putting up 619 total yards per game including 396.9 through the air, both tops in the nation. The Bearcats do have a top 10 defense though, and are allowing less than 200 ypg through the air so something has to give on Saturday.

Central Florida has rattled off three straight wins since their disappointing 50-49 loss at Memphis in week 7. That stretch includes a 51-34 win over Tulane, beating Houston 44-21, and a 38-13 victory over Temple last week. That’s an impressive run, but also expected as UFC was at least a 21 point favorite against both Tulane and Temple.

Regardless of who it’s been against, Knights QB Dillon Gabriel has been superb this season with 23 TD to just 2 INT. That being said, Gabriel had his two lowest passing totals of the season over the past two games, and failed to complete 60% of his passes in both of those contests.

The benchmark game for the Central Florida defense came in week 7 when they allowed 486 passing yards and another 217 on the ground in the 50-49 loss to Memphis. Granted UCF counted with nearly 800 yards of their own offense, but a defensive showing that bad sticks with you. By comparison, Cincinnati allowed just 10 points to Memphis.

The Bearcats were finally able to break a 3-game losing streak in this series with a 27-24 win over UCF last season as +3.5 home underdogs. The 2020 meeting should see a lot more points put on the board the way both teams are scoring. Ultimately though, Cincinnati’s defense is the better of the two and gives them the edge on Saturday afternoon.