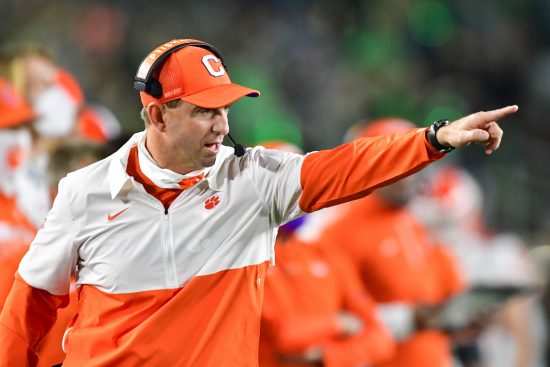 It has been almost a month since Trevor Lawrence took a live snap in a game for the Clemson Tigers and a lot has happened since then. For the #1 ranked team in the country, an ACC title was as good as theirs predictably heading into an easy matchup against Syracuse. Except during this game, the Tigers showed signs of shakiness with just a 6-point lead late in the third quarter before opening it up in the fourth quarter in typical fashion.

However this was unfortunately a sign of bad things to come as it was announced later that week that Lawrence would be sidelined for the next two weeks with the coronavirus. This forced true Freshmen D.J. Uiagalelei to step in and lead the Tigers against the Boston College Eagles but Clemson found themselves down again by as many as 18 points before they came back in the second half again barely beating the Eagles. This coming from behind strategy however would not work against a great team like Notre Dame however as Clemson was down most of the game and couldn’t hold onto the small lead they built late in the fourth quarter losing in double overtime.

Now with a bye week to clean things up and Lawrence ready to resume his national championship campaign, the Tigers look forward to a tune up game against Florida State.

Florida State had people fooled when it looked like they had finally turned things around winning a home game against #5 North Carolina. Since then we have learned that North Carolina deserved to be ranked nowhere near that high and the Seminoles still are who we thought they were losing the last three straight by at least 16 points. Their presumable starting QB Jordan Travis has more interceptions than he has touchdowns, the Clemson offense scores more than two times the amount of points the Seminoles do yet the Tigers defense still gives up less per game than the pathetic Florida State offense puts up.

On paper, this should be a cake walk for the Tigers as they are angry coming off a bye and realize they might not potentially get their #1 overall seed in the playoff back. However, this means they must not take any game for granted as simply winning games against inferior ACC opponents by a small margin won’t cut it anymore if they want to prove they belong in that #4 spot versus other schools right behind them.

With this being said, I expect Lawrence to come back and have a revenge game on a Florida State team giving up an average of five touchdowns a game and nearly 500 yards of offense. However don’t be shocked if he looks rusty to start along with the rest of the offense considering the rough three weeks they have had.

The toughest part for Clemson moving forward will be not overlooking any opponents they play leading up to the presumable ACC championship game and rematch with Notre Dame.