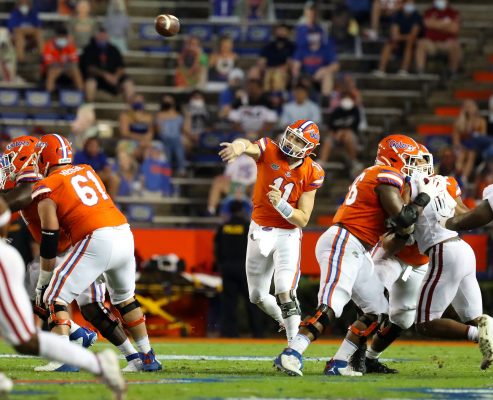 The senior from Manvel, Texas has been nothing short of spectacular in just his first full season as a starter throwing more touchdowns than anyone in the country this year with an astounding 28 of them. Now he must keep his performance at the highest level to keep the Gators on track to the SEC championship game and the College Football Playoff if a few things go the Gators’ way.

Vanderbilt has always been the typical punching bag of the SEC in football at least. However, when looking at their 0-6 record you realize a lot of their losses have been insanely close. They nearly beat top ten Texas A&M their first game back on the season only losing by five and their last two losses have been within one possession.

The trouble however has been poor offensive production. They average just sixteen points a game while giving up 35. More importantly, they (like most defenses in the SEC), have nobody that can matchup with Florida’s 6’6” Tight End Kyke Pitts. Pitts missed the last game at home against Arkansas with a concussion, so look for him to get targets early on and add to his already eight touchdown total on the season.

Simply put, the Commodores just won’t be able to keep up with Florida’s offense. The Gators have scored at least 38 points in their last five games and have so many weapons to hurt teams with through the air including the human joystick Kadarius Toney and Penn. State transfer Justin Shorter. More importantly, Trask has thrown for at least four touchdowns in every single game he’s played so far, in some he’s even done it in the first half.

There is no doubt that Florida will win this game, however it will be interesting to see how their defense performs, which has been shaky at times, especially when it faces teams in the upper tier of the SEC. Not that this Vanderbilt team is anywhere near an upper tier SEC team, but the Gators just played lowly Arkansas last week and gave up 35 points to them at home. The Gators D gave up a long touchdown pass that let the Razorbacks tie it 7-7 in the first quarter and gave up long touchdown run that allowed the Razorbacks to get within a score of tying.

The sheer offensive production from Florida has overshadowed the lack of their defense at times, but we have yet to see them play a complete game from start to finish and still give up an average of 30 points a game.